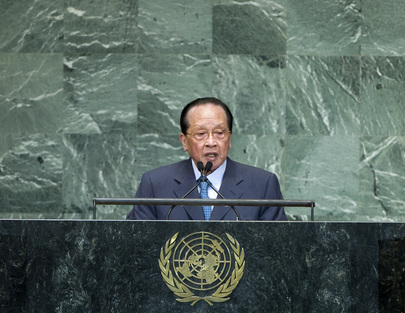 HOR NAMHONG, Deputy Prime Minister and Minster for Foreign Affairs and International Cooperation of Cambodia, said that, if the complexities of an increasingly interdependent world were to be faced, with both opportunities for rapid growth and threats of world-wide crises, “the current multilateral system needs to be transformed drastically into a well-coordinated and permeable body of institutions that can deliver innovative and feasible solutions to a globalized international society”. Regional cooperation was an essential element in that respect, he said, describing efforts to stem financial risks initiated between the Association of South-East Asian Nations (ASEAN) and industrialized East Asian countries.

His country, he said, having achieved stable growth for a number of years, was confident of reaching its Millennium Development Goals despite its limited resources. However, many developing countries still faced great obstacles in the effort, being too vulnerable to financial crisis, debt burden and unmet donor commitments. For that reason, while welcoming the outcome of the Rio+20 Conference, he strongly advocated for the Millennium Goals to remain a fundamental milestone, with renewed efforts to assist those that had fallen behind. As climate change could have devastating effects on them and all of the world’s most vulnerable people, it was regrettable that the international community remained divided on an effective response. He called for developed countries to reduce their greenhouse gas emissions and meet their commitments made in recent conferences, and for disaster management cooperation to be strengthened, as it had been on the regional level by ASEAN.

Major global reform was also urgently needed to implement the Rio+20 recommendations to modernize and encourage small-scale agriculture to face the growing challenge of food security, he said. As high oil prices were linked to high food prices, a major rethinking of policies on both commodities was needed. He stressed that the Group of 20 (G-20) had a crucial role to play in meeting such global challenges, noting that Cambodia, as ASEAN chair, represented the region at the group’s June summit in Mexico, and advocated there for improved financial and trade architecture. He supported the priorities agreed there to promote trade for development, job creation and economic growth.

On the United Nations, he said that comprehensive reform was needed to reflect the present world’s reality. The General Assembly and the Economic and Social Council should be empowered to fulfil their mandates effectively; the Security Council should be expanded in both permanent and non-permanent membership to equitably represent both developed and developing countries. Noting Cambodia’s contributions to multiple peacekeeping missions, as well as its experience in ending civil war, including its own post-conflict efforts, he signalled his country’s wish to contribute more effectively through the Security Council to the cause of peace, security and peaceful settlement of disputes. For that reason it had, for the first time since joining the Organization in 1955, presented its candidature for non-permanent membership for the period 2013 to 2014. In closing he expressed deep regret for the attack against the United States consular mission in Libya, while understanding the anger provoked by the disregard shown towards Islam.