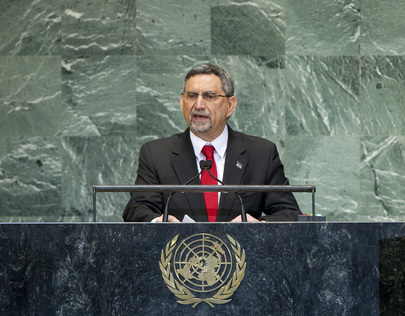 JORGE CARLOS DE ALMEIDA FONSECA, President of Cape Verde, said the world was still reeling from fallout from the economic and financial crisis, which had impacted social development efforts in many countries. His country was among a host of small nations that could provide modest solutions to help overcome many of the day’s global challenges. Specifically, Cape Verde could be seen as an example of peaceful coexistence and peaceful progress. The people of the island nation were committed to a culture of tolerance, and that principle had shaped its political policies. He was certain the Cape Verdean way of life had contributed in some way to easing tensions throughout Southern Africa. “We can almost say that our foreign policy has been the translation of our peaceful ideology,” he added. He went on to say that a key example of that peaceful way of life was the fact that earlier this week, its Constitution had celebrated its twenty-fifth anniversary. Cape Verde’s guiding document had ensured peaceful political transitions and had aimed to integrate the principles of the United Nations. He acknowledged that work was ongoing to bolster the Constitution and see that all its noble aims were achieved. Despite the challenges that his small country faced, he was pleased to say that it was on track to achieve the Millennium Goals. Cape Verde had also received positive reviews from major financial institutions in the latest Human Development Report. At the same time, Cape Verde could not ignore that its small economy, based on a few key sectors and activities, would continue to need support. The Government would also need assistance as it sought to address social exclusion, outmoded infrastructure and youth unemployment. Moreover, Cape Verde, like many other island nations, was deeply concerned about the possibility of facing a major natural disaster. As such, the international community must spare no effort in strengthening environmental protection measures and make progress on “green” initiatives that would enhance sustainable development. Turning to wider Africa, he expressed profound concern that regional Governments continued to be disproportionately affected by fallout from the financial crisis and environmental degradation. Those factors were exacerbated by the fact that those Governments were already struggling to cope with a host of ills, including political instability, tensions and the rise of extremism in some areas. Yet, a new wave of African leaders was seeking to do more for the continent. And in that effort, the international community must do more to assist them. Africa was awash in recommendations, recipes and proposals, but what were needed were real actions leading to real development. Getting there would require Africa to adopt a new line of thought that did not reject the universal values of democracy. “African needs to reconquer its self-confidence and to strengthen the ties between the United Nations and the African Union to create a true partnership for development,” he said. At the same time, the international community would need to ensure a more equitable trade environment and to step up efforts to achieve sustainable development.