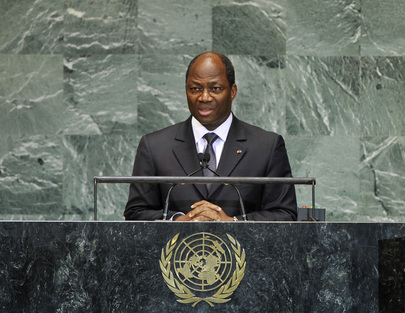 DJIBRILL YPÈNÈ BASSOLÉ, Minister of Foreign Affairs and Regional Cooperation of Burkina Faso, said that the magnitude of current challenges to international economic development and peace and security called for greater courage, effort, creativity and solidarity from the international community. This year his country had been tested by a food crisis, precipitated by a lack of rain and loss of cereal crops and exacerbated by the influx of refugees from Mali. He expressed gratitude to the specialized agencies of the United Nations, as well as to donor countries for their assistance that allowed both refugees and the local population to survive the situation with dignity. In regard to his country’s consolidation of democracy, he said that, after the successful organization of biometric voter registration of the entire country, this coming December would see legislative and municipal elections, organized with the goal of the greatest transparency and fairness.

Growth and sustainable development were being prioritized to generate a strong and prosperous economy to meet the basic needs of the population, to meet the Millennium Development Goals and to achieve sustained growth along with conservation of natural resources. In that effort, he hoped that his country’s development partners would remain at its side. Underscoring the importance of the peaceful settlements of disputes as the theme of session, he called for renewed efforts to that end in all conflicts around the world, noting his country’s participation in mediation in the Malian crisis in conjunction with the Economic Community of West African States (ECOWAS), with the aim of resolving by dialogue the security and institutional crisis in the country through promoting the implementation of frameworks agreed to by the parties and acceptable to the international community. He said his country, in conjunction with its partners, would continue their work in that regard and he called on the parties in northern Mali to put down their arms, respect fundamental freedoms, distance themselves from extremists and engage in dialogue.

Affirming that the problems in Mali arose from common threats to all countries in the region, he welcomed recent United Nations attention to the problems of the Sahel as a whole. On Guinea-Bissau, he called on all parties to work for a consensual outcome respecting the rule of law, and on Darfur, he called for the implementation of the Doha Document, noting that his country had contributed to peacekeeping in both those countries. A fair, consensual resolution in Western Sahara was also needed, as the status quo was neither viable nor did it benefit either of the parties. He was of the opinion that the Moroccan initiative for negotiation on an autonomous status for the region could be an appropriate route to that end.

In other areas, he said that continuing economic insecurity and natural disasters were testing the cohesion of societies and he called for greater solidarity in response. Rio+20 reminded the international community of its shared, but differentiated responsibilities, and acceptable compromises in all areas were needed. On the empowerment of women, he said that his country had spared no effort to promote the participation of women and defend women’s rights, as shown by efforts against female genital mutilation by Burkina Faso’s first lady, which he hoped would have the backing of the entire international community. The achievement of gender rights was particularly important in developing countries, he maintained. Finally, he called for granting Taiwan its rightful status in the family of nations, and stressed that reform of the United Nations was critical as the basis for the improvement of global governance as a whole.