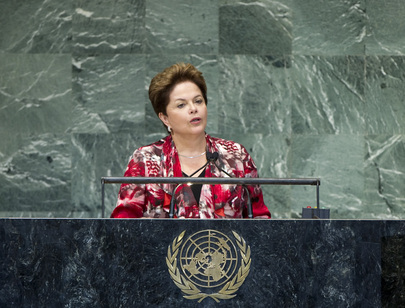 DILMA ROUSSEFF, President of Brazil, said orthodox fiscal policies were worsening the recession in developed economies, with repercussions for emerging countries. Leaders of the developed world had not yet found a path that combined appropriate fiscal adjustments with measures to stimulate investment and demand; monetary policy could not be the only response to growing unemployment, the increase in poverty and the dismay that affected the most vulnerable segments of the world’s population. Developed countries were making use of expansionist monetary policy, which wreaked havoc on exchange rates, thereby causing artificial appreciation of emerging countries’ currencies, making them lose “market space”, which only deepened the global recession. Nor could she accept that the legitimate trade defence initiatives of developing countries were unfairly classified as protectionism; protectionism in all forms must be fought.

In sum, she said, there would be no effective response to the economic crisis without a reconfiguration of the relationship between fiscal and monetary policy, in order to control the “currency war” and stimulate global demand. Brazil had managed to maintain extremely high employment levels, continuing to reduce social inequality and significantly increase workers’ income. It had exerted strict control over public spending and increased investments in infrastructure and education. It had also controlled inflation and vigorously promoted policies aimed at social inclusion and poverty eradication. Additionally, Brazil was carrying out structural reforms in the financial and welfare areas, and it had reduced the tax burden and energy costs. It had also invested in knowledge to generate science, technology, and innovation.

While important social movements, with varying political orientations, had swept away despotic regimes across the Middle East and North Africa, the meaning and direction of those transitions still could not be clearly discerned, she said. Yet, in all of those movements, cries of protest against poverty, unemployment and the lack of opportunities and of civil rights imposed by authoritarian Governments were easy to identify. Brazil condemned in the strongest terms the violence raging in Syria, for which the Damascus Government bore the largest share of responsibility. However, her country was also aware of the responsibilities of armed opposition groups, especially those increasingly reliant on foreign military and logistical support. There was no military solution to the crisis. Diplomacy and dialogue were the only option. Further, as President of a country host to thousands of Brazilian Muslims, she said “I declare here today our vehement repudiation of the escalation of Islamophobic prejudice in Western countries.”

Touching on the Israeli-Palestinian question, she reiterated her Government’s support for the recognition of the Palestinian State as a full United Nations member, stressing that only a free and sovereign Palestine would be able to fulfil Israel’s legitimate desires for peace, security and regional political stability. The international community had encountered growing difficulty in dealing with regional conflicts. To that, she said it was critical not to allow the Security Council to be replaced — as had been happening — by coalitions formed without its consent, beyond its control and without due regard for international law. Use of force without Council authorization was illegal, yet some quarters were starting to see that as an acceptable option. Brazil sought legitimate actions, founded on international legality. In that spirit, she had defended the need for a “responsibility while protecting” as a complement to the “responsibility to protect”.

Turning to the Rio+20 Conference, she said the outcome not only preserved the 1992 legacy, but also set the starting point for a sustainable development agenda. The United Nations had before it several tasks mandated by the Conference, she said, adding that the enormous gathering had shone a powerful light on the “future we want”. It was crucial to heed the many warnings sounded by science and society and to consider climate change as a main challenge to present and further generations. In a context of environmental challenges, economic crises and threats to peace in different parts of the world, Brazil was committed to working with its neighbours; integrating in the Latin American and Caribbean region was a priority. “Our region is a good example for the world.” Among other steps, it had achieved the rule of law and understood that democracy was not immune to attacks. Brazil also had reaffirmed its commitment to keeping its region free from weapons of mass destruction, she said, stressing that the world clamoured for food instead of weapons. Finally, she said the time had long passed to put an end to the economic embargo against Cuba. In closing, she said the world community must work to ensure multipolarity prevailed; cooperation predominated over conflict; dialogue overcame threats; and negotiated solutions forestalled use-of-force interventions.