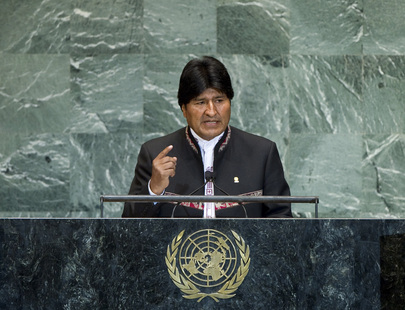 EVO MORALES, President of Bolivia, recalling that the theme of the general debate was “the peaceful settlement of disputes”, told the Assembly about the events surrounding Chile’s “unjust invasion” into his country searching for natural resources.  That invasion, in the early part of the last century, had ultimately robbed Bolivia of its access to the sea, effectively turning it into a landlocked country.  A treaty had been signed in 1909, but that accord had never been complied with.  Chile could not disregard Bolivia’s rights.  It could not act as if its treaty with Bolivia did not exist.  It could not continue to hurt the Bolivian people, who were only calling for an end to the country’s landlocked status.  Treaties could be altered or reversed, he said, reiterating his call on Chile to resume talks on the matter so that it could be resolved peacefully.  “Everyone in our country has a profound feeling that we must recover our access to the sea [and] we need the support of all you at the United Nations to put an end to this situation,” he said.

On other matters, he said that thus far, statements in the Assembly had revealed that world leaders agreed “in theory” on important issues such as human rights and democracy, but in fact there was very little real agreement on anything.  “The United Nations are not united”, he said, and the Organization would remain fractured until its institutions and mechanisms were reformed and democratized.  At the same time, he was pleased that some statements he had heard — questioning military intervention and the establishment of military bases — let him know that “some of us are losing our fear in front of the big Powers”.

If democracy was to be defended, the resolutions and decisions of the United Nations must be respected.  For example, he said that, while the American people spoke of democracy, Washington did not respect decisions taken by the United Nations, particularly regarding its illegal and “genocidal” extraterritorial blockade against Cuba.  Moreover, the United States had no authority to place nations such as Cuba on a list of terrorist supporters, especially since the United States itself, after “so many deaths, so many interventions”, was essentially the “first practitioner of State terrorism”.  That attitude had led that country to invade Libya under the guise of humanitarian intervention.  In reality, that action had been carried out solely to take control of Libya’s oil and other natural resources.

Bolivia was committed to fighting drug trafficking and had joined the relevant 1961 convention with the reservation that the coca leaf could be used for traditional purposes.  He acknowledged that there was an illegal market for cocaine and his country was combating it.  Indeed, there had been a net reduction in coca cultivation.  But at the same time, the country’s cultural traditions must be respected, especially by nations like the United States, which were always touting their commitment to tolerance and human rights.  As for the status of the Millennium Development Goals, he said that, as of last year, Bolivia had decreased levels of extreme poverty by 20 per cent, with more than 1 million of those persons now classified as “middle class”.  He said the Government had also vastly improved access to clean water, especially in rural and indigenous communities.  In addition, Bolivia was making good progress in maternal health.

He had received a mandate from the Bolivian people to recover or nationalize the country’s natural resources and his key priority was to rectify the wrongs committed at the hands of neo-liberal Governments and multinational corporations.  Outdated contracts with such corporations actually allowed Bolivia to retain only 18 per cent of the funds derived from the exploitation of its natural resources.  Removing those policies had transformed the national economy almost immediately.  “Natural resources did not belong to multinationals they belong to the peoples of the world under responsible State administration”, he declared, stressing that when a nation had the will to change, it could change.  And while Bolivia still had many challenges to address, it was committed to tackling them in a holistic and transparent manner.  In conclusion, he urged all peace-loving nations to continue to reject capitalism, to continue to question the motives of hegemonic Powers and to continue striving on behalf of their people.

The representative of Bolivia, speaking in exercise of his right of reply, said he could not remain silent in view of the falsehoods put forward by his counterpart from Chile, who had stated that Bolivia did not have the right to claim a coastal outlet.  In 1879, he recalled, Chile had invaded Bolivian territory, seeking to appropriate resources.  That event had resulted in an unjust, unfulfilled treaty.  Bolivia rejected Chile’s subjective views regarding the last General Assembly of the Organization of American States (OAS), he said, adding that the regional body’s lawyers had not considered Bolivia’s claim in full.

He went on to reject Chile’s statement that Bolivia’s 2009 Constitution contravened the international legal framework, pointing out that for decades his country had sought to resolve its issues with Chile through dialogue.  In 2010, however, Chile had cancelled a three-point agenda containing feasible proposals, claiming the issue was a bilateral matter.  However, 11 OAS resolutions were in force, including resolution 426 (1979), he noted, emphasizing that the negotiations should take account of the rights of the parties involved and consider the inclusion of a port, as well as matters of integrated development.

The representative of Bolivia said his counterpart from Chile had referred to 23 March, a day on which Bolivians painfully commemorated the loss of their coastline through the use of force.  Chile had failed to comply with the 1904 Treaty, he said.  Not only did the legal regime of free transit not exist, but Chile obstructed free transit.  What prevailed was the need to rectify injustices that continued to cause suffering, he said.  Having underscored the need for dialogue multiple times, Bolivia had received no response 100 years after the invasion.  He called for the restoration of Bolivia’s maritime access, stressing that his Government would continue to raise the issue in all international forums, guided by international law and justice.  Chile had unilaterally called off bilateral dialogue, and Bolivia had applied to all international forums and jurisdictions to regain its sovereign access to the ocean.