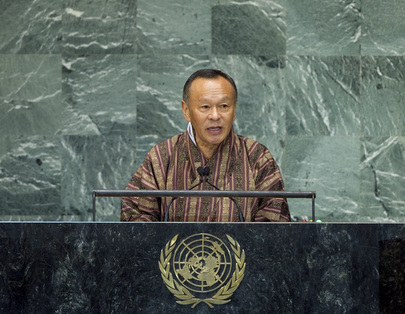 LYONCHOEN JIGMI YOEZER THINLEY, Prime Minister of Bhutan, said the world’s economic, social, ecological and political problems were interconnected and rooted in the “folly of mankind’s pursuit of the wrong ends in wrongful ways”. The Secretary-General had sounded the alarm about the international community’s direction as a human family, but he had also pointed to moments that projected hope. One such moment had been when it had resolved that it was time to accept human well-being and happiness as a developmental goal binding all of humanity with a common vision and pursuit, and that it should bring about a holistic, sustainable and inclusive approach to development. That resolution had prompted Bhutan to host a high-level United Nations meeting on well-being and happiness, and the General Assembly had later declared 20 March as the annual International Day of Happiness.

The agreement to develop Sustainable Development Goals was a substantive outcome of the Rio+20 Conference, consistent with the Assembly resolution and Bhutan’s efforts, he said. Bhutan hoped to actively participate in that work and saw it as evidence of the growing convergence on the understanding that the world must break from the past and agree on a collective vision. He hoped the new Goals would steer the post-2015 international development agenda and set humankind on the right course. He was inspired by the indomitable spirit of the hundreds of side events at the Rio+20 Conference, the Secretary-General’s appointment of a high-level panel to advise on global development beyond 2015 and the launch of the Sustainable Development Solutions Network.

Bhutan had initiated several steps in the same direction in line with the 2 April high-level meeting on well-being and happiness, he said. In July, Bhutan’s King had set up an international expert working group comprising more than 50 “thought” leaders to shed light on the proposed development paradigm in the coming two years. Their work would be made available during the Assembly sessions in 2013 and 2014. The King had also appointed a national steering committee to guide and support that process. The working group’s findings would contribute to the high-level panel’s efforts. Bhutan also looked forward to the early establishment of the intergovernmental open working group tasked to design the Sustainable Development Goals.

For the first time, Bhutan was seeking non-permanent membership in the Council, for the 2013-2014 period, he said. All States, regardless of size, population and level of development, must be given the opportunity to contribute by bringing diversity of thought, approach and their will to work on the Council. The election of non-permanent Council members next month would give the international community an opportunity to demonstrate its commitment to the fundamental precept of sovereign equality, as enshrined in the Charter, and to the principles of democracy and rotation that gave it meaning.