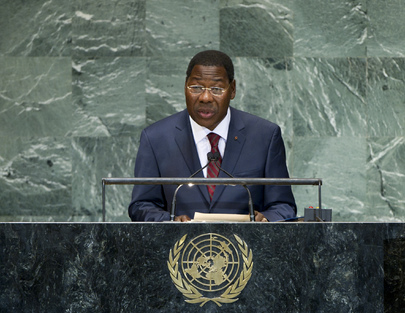 BONI YAYI, President of Benin, said that in a world shaken by multiple crises, today’s debate offered the opportunity to ensure peace and security, and to improve global governance for economic growth. Welcoming the Assembly’s theme of the peaceful settlement of international disputes, he hoped the focus on that “thorny” question would offer solutions that would allow Africa to devote its resources to sustainable development. Indeed, progress on the continent was constrained by the circulation of small arms and light weapons, which fed transnational organized crime; piracy and armed robbery at sea off the Horn of Africa; un- and under-employment; a lack of food and chronic malnutrition; soil erosion; climate upheavals; and poor governance, to name a few. Despite such difficulties, elections in African nations throughout 2011 and 2012 showed their adherence to a process that was rooting democracy and the rule of law on the continent. In that vein, he discussed efforts by the Economic Community of West African States (ECOWAS) to address crises in Mali and Guinea Bissau, saying that in Mali, terrorist cells threatened to destabilize the entire West African subregion. He appealed for help in eliminating that threat and preventing large-scale humanitarian disasters. In Guinea Bissau, he hoped mediation efforts by ECOWAS and other partners would bring about a coordinated approach to resolving the crisis. Elsewhere, he welcomed African Union and international efforts to pursue peace in the Democratic Republic of the Congo, Somalia, Sudan, South Sudan and Madagascar, urging more work with the Security Council and the Peace and Security Council of the African Union to mediate conflicts, build peace and promote human rights. More focus must be placed on financing peacekeeping operations, including the African Standby Force. Measures to rationalize the United Nations had resulted in the creation of many useful new bodies, he said, including the Peacebuilding Commission and the Human Rights Council. Reform of the Security Council should make that body inclusive, and one that repaired the historical injustice to Africa. Such efforts must be complemented by others to involve youth and women in the Organization. Turning to the Middle East, he said the United Nations had the wherewithal to find a solution to the Palestinian situation. Africa favoured a “one land two States” approach to restore peace, as Palestinians and Israelis must be able to live in friendship, peace and prosperity. On economic matters, he said the economic slowdown, which started in 2008, persisted, with millions of people still unemployed, many of whom were in Africa. Aid for development had fallen, while 16 million people in the Sahel faced famine and malnutrition, despite collective efforts, including by the African Union through the New Partnership for Africa’s Development (NEPAD). He hoped the High-level Panel of Eminent Persons advising the Secretary-General on the post-2015 development agenda would suggest a sustainable human development vision that centred on equity. He went on to say that Africa could become a global growth engine with professionalized youth, and with that in mind, had decided to create a free trade zone to accelerate growth. In its unabating fight against poverty, it had no choice than to ensure progress on multiple fronts — food, health, water, environment, primary education, empowering women and children and fighting HIV/AIDS among them. He hoped the sovereign debt problems facing northern partners would not distract them from increasing their aid for development. He was pleased that Heads of State at the United Nations Conference on Sustainable Development said they would spare no effort in achieving internationally agreed development goals, including the Millennium Development Goals. In closing, he said a new world presupposed inclusive governance in international bodies. Only by sharing resources and technology would a new world characterized by peace, security and shared prosperity be possible.