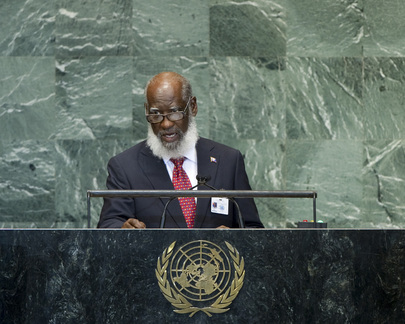 WILFRED D. ELRINGTON, Minister for Foreign Affairs of Belize, said the theme for the sixty-seventh session was most timely and fitting because although his country had gained independence in 1981, after 100 years of colonial rule by the United Kingdom, its sovereignty was still threatened by Guatemala’s territorial claim dating back to the 1940s. However, the Governments of Belize and Guatemala had agreed to a recommendation of the Organization of American States (OAS) Secretary General to allow adjudication of Guatemala’s by the International Court of Justice, provided that was supported by the citizens of both States, which would be determined in simultaneous referenda scheduled for 6 October 2013.

Stressing that Belize was still experiencing all the growing pains that naturally afflicted young nations, he said its situation was further aggravated by the population’s diversity. Given its multiethnic, multi-faith, multilingual and multicultural population, “the urgency for social cohesion cannot be overstated”. That challenge, alongside problems posed by natural disasters, climate change, financial collapse and transnational criminal activity, required not only domestic initiatives, but cooperation with international partners, including the United Nations and its various programmes and agencies.

He said his country supported all regional activities and had joined OAS, the Caribbean Community (CARICOM), the Central American Integration System and the Community of Latina American and Caribbean States. Noting the direct and devastating impact of climate change on the region, he said his Government worked with its CARICOM partners and the wider Alliance of Small Island States to advance its interests in the climate change negotiations, and would be hosting the CARICOM Climate Change Centre, tasked with providing technical and scientific advice on the formulation of policies.

Regional responses were needed to combat trafficking in human beings, drugs and arms, he said, reaffirming his country’s commitment to implementing the Central America Regional Security Strategy to combat the activities of such “merchants of death and destruction” in the region. Regrettably, no conclusion had been reached to what had appeared to be an emerging consensus on an arms trade treaty. He also expressed concern that Latin America and Caribbean States were wrongly and unjustly classified as middle-income countries, when such “generic classifications” masked the varied challenges they faced in the midst of poverty, severe income inequality, economic vulnerabilities and debt. Finally, he joined others in calling for the lifting of the economic embargo against Cuba and for the full participation of Taiwan in the United Nations. He also urged Member States to address the concerns of the people of Israel and Palestine.