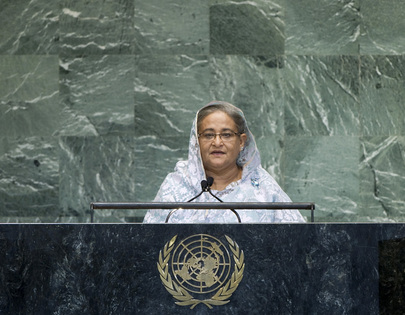 SHEIKH HASINA, Prime Minister of Bangladesh, said the complex challenges the world faced demanded collective efforts towards peaceful solutions taken under the auspices of the United Nations. As such, the theme of the general debate — the peaceful settlement of disputes — was welcomed, she said, noting that that principle had inspired her to continue pressing for full implementation of the Chittagong Hill Tracts Peace Accord. It was also possible that she could peacefully settle the 2009 “border guards mutiny”, thus averting a “dangerous crisis”. As for external relations, she said she had resolved a long-standing dispute with India over water-sharing along the River Ganges, and a 41-year-old maritime boundary dispute with Myanmar through the International Tribunal for the Law of the Sea.

She went in to say that her country’s commitment to peace had been further demonstrated, including as one of the top contributors to United Nations peacekeeping operations and one of the founding members of the Peacebuilding Commission. She said that in four decades in politics, she had learned that peace prevailed when justice prevailed. Justice, which was vital for development, was only possible through democracy. People must be empowered or else societies would be burdened by social injustice, poverty and inequality. To that end, Bangladesh was empowering its people by eradicating poverty and deprivation, while providing social safety nets, creating jobs and promoting sustained growth and human development.

Recalling that she had presented her country’s “People’s Empowerment and Development” strategy at the 2011 general debate, and in Dhaka, last month, she said the initiative had received the support of 62 countries. For its part, Bangladesh had set up Parliamentary Standing Committees in 2008 charged with dealing with specific issues. Some of them were chaired by opposition Members of Parliament, she said, adding that Bangladesh had also removed media controls and expanded the number of privately held television channels. It was also pressing ahead with a regional connectivity scheme.

Measures to empower societies should include strong elements of gender equality and women’s empowerment, she said, adding that Bangladesh was providing free primary education for girls under its new national education policy. Over the past four years, the country had also bolstered women’s political participation, with nearly 13,000 women having been elected to local governing bodies and 69 to women Members of Parliament. Five Cabinet members were women, and overall, 30 per cent of all general Government posts, including in the judiciary, were reserved for women. All such empowerment efforts had helped reduce poverty by some 10 per cent, enhanced per capita income by 34 per cent and dramatically reduced what had been double-digit inflation, she said.

While the country’s achievements had earned global recognition, some of its forward progress had been hindered by the impacts of climate change, such as property loss and population displacement, she said, recalling that three years ago, she had called for a more just climate regime to deal with sea-level rise and the economic rehabilitation of “climate migrants”. Today, she reiterated her call for an international agreement on greenhouse gas emissions based on the principle of common but differentiated responsibilities. Noting that terrorism could derail a country’s progress, she said Bangladesh had suffered its share of terrorist incidents from 2001 to 2006, pointing out that she had herself been the target of a grenade attack in 2004 that had killed 42 people and wounded some 500 others. The Government had adopted a “zero-tolerance” policy on all forms of extremism.