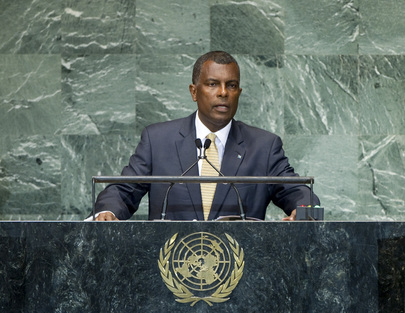 FREDERICK MITCHELL, Minister for Foreign Affairs and Immigration of the Bahamas, condemned the violence that had resulted in the deaths of the United States Ambassador to Libya and three compatriot diplomats, saying that increasing armed violence and crime should not be allowed to continue “if we are to save successive generations from a life steeped in violence and lawlessness”.  Although it had been more than a decade since the 2001 adoption of the United Nations Programme of Action on the illicit trade in small arms and light weapons, the level and intensity of armed violence impacting the Bahamas had still not abated.  “Creating a safe Bahamas is a top priority for the Government”, he said, adding that it was committed to creating a national intelligence agency and a national firearms control strategy, which would entail the creation of a firearms department and database.  It also planned to enhance the operations of the defence force so it could more effectively control the country’s porous borders.

Providing reliable and affordable energy might be the single largest factor affecting future development in the Bahamas, he said, noting that the issue was so important that the Prime Minister had made it a personal mission.  The Government had enacted legislation to foster the sustainable use and management of ecosystems through better land-use planning.  Under the United Nations Convention on the Law of the Sea, it had also initiated actions to preserve fish stocks by introducing penalties for overfishing, ban long-line fishing, establish the Bahamas as a shark sanctuary, and expand protected marine areas.  In that regard, he welcomed the outcome of the Rio+20 United Nations Conference on Sustainable Development, saying it offered significant opportunities, particularly for small island developing States, like the Bahamas.

Stressing the need for a greater United Nations role in the area of international cooperation in tax matters, he joined the wider “Group of 77” developing countries and China in calling for the conversion of the Organization’s Committee of Experts on International Tax Matters into an intergovernmental subsidiary body of the Economic and Social Council.  He deplored the use by some States of domestic laws for extraterritorial effect in such areas as human trafficking, financial services and drug smuggling.  Such practices were misplaced and placed an unfair burden on small States, he said, adding that they could be interpreted as “a departure from the international norms of respect for the sovereignty and territorial integrity of States”.

Turning to national economic trends, he said the Government’s imperatives included strengthening the domestic economy, creating jobs and achieving a higher standard of living.  The nation’s unemployment rate stood at 15.9 per cent, and 34 per cent for youth.  Gross national income (GNI) was significantly affected by a small population of wealthy expatriates whose high incomes skewed that measure away from true economic realities, he said, pointing out that the construct of per capita GNI, therefore, took on a unique interpretation in the context of developing countries like the Bahamas.  Such measurements should not be used as a pretext to restrict their access to financial resources, he stressed.  With the Assembly set to consider the scale assessments for the apportionment of expenses relating to the regular and peacekeeping budgets for 2013-2015, per capita GNI should not be accorded overriding weight in determining capacity to pay, he added.