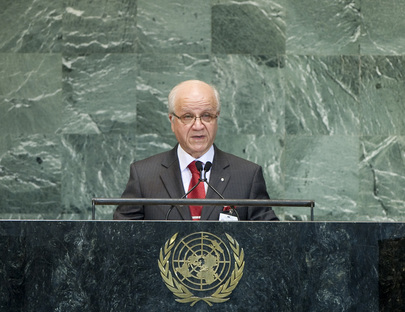 MOURAD MEDELCI, Minister for Foreign Affairs of Algeria, said the world faced a complex turning point, due to geopolitical upheavals in the Middle East and the global economic crisis.  The collective faith in multilateralism should pool efforts to overcome the uncertainty caused by those ills.  He called for efforts to prevent the economic crisis in the developed world from spilling over to other regions, particularly Africa.  The return of confidence and growth should lead the world to better coordinate the work of the Bretton Woods institutions.  Algeria had made enormous sacrifices, carrying out rigorous expenditure control and social policy to redistribute wealth.  It would maintain investment to spur economic growth during the 2010-2014 period.  Development, peace and security were interrelated.  Regionally, Algeria had contributed to the process of democratization and the rule of law.  It had maintained cooperation with countries in the Maghreb and Sahel regions to fight hunger and poverty, achieve food security, and develop agriculture, infrastructure and renewable energy.

Algeria shared with its Arab and African partners its experience with fighting terrorism, organized crime and trafficking of drugs and weapons, he said.   It welcomed recent changes in North Africa and the Middle East, due to the quest for democratic ideals, justice and liberty.  He condemned all forms of violence and repression.  He expressed hope that the people of Western Sahara would be able to exercise their right to self-determination.  He urged Morocco and the Polisario Front to act in good faith and launch formal talks to reach a just solution to their conflict over Western Sahara.  He supported the United Nations commitment to conflict prevention through tireless diplomatic efforts and the role of the Organization in promoting solutions to major crises as part of efforts to promote development.  Algeria was a member of the Special Joint Committee of the United Nations and the League of Arab States to monitor the Syrian crisis.  Algeria had supported Special Envoy Kofi Annan and it would do the same for his successor.

In the Middle East and North Africa region, violence and terrorist acts were linked to organized crime and trafficking of drugs and weapons, he said.  The complex situation in Mali, whose root cause was underdevelopment, seriously threatened the Sahel region.  Algeria was working with the Economic Community of West African States (ECOWAS), the African Union and other regional actors to achieve a peaceful, lasting settlement to the crisis.  He supported United Nations reform, including to revitalize the Assembly and to make the Council more democratic and representative, particularly for Africa.  Algeria had contributed to decolonization in Africa, enjoyed peace with its neighbours and was working towards regional integration.  It was a candidate for membership in the Human Rights Council in 2014-2016.  He stressed the need to fight Islamophobia, which had been used to commit acts of terrorism.  He condemned the tragic events sparked by the anti-Muslim video and violent acts against diplomatic personnel and installations.  He proposed holding an initiative under United Nations auspices to identify ways to prevent hate crimes.  The responsible, adequate use of freedom of expression was needed to give the world a more brotherly dialogue among peoples of different religions.

He welcomed Palestine as a new United Nations member, based on 1967 borders.  He recognized the legitimate, inalienable rights of the Palestinian people to sovereignty and self-determination.  Creation of a nuclear-weapon-free zone in the Middle East was an important confidence-building measure.  He supported the efforts of Finland’s Secretary of State to serve as a facilitator of the upcoming conference on the Middle East.  He supported efforts towards sustainable development and urged Member States to shoulder their common but differentiated responsibility in terms of capacity-building, technology transfer and financing.  Algeria’s President had given new impulse to reform to ensure the rule of law and women’s empowerment.  Today, women accounted for 146 members of Parliament, or one third of the lower chamber.  Algeria had made progress towards democratic freedoms and it already had achieved the Millennium Development Goals.  It was selected as one of 50 countries to consult with the United Nations on the Millennium Development Goals and the post-2015 development agenda.