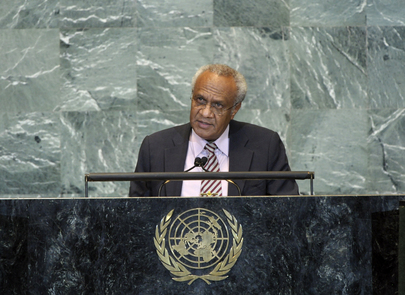 MELTEK SATO KILMAN LIVTUNVANU, Prime Minister of Vanuatu, said carrying out the general debate’s theme — the role of mediation in the settlement of disputes — would require all countries to be more creative and forward-looking. Settlement of disputes by peaceful means was central to the work of the United Nations, and he encouraged Israelis and Palestinians to continue peaceful negotiations towards a settlement that “will ensure regional and global stability”. He also urged the Secretariat to revisit the framework with which it implemented and fulfilled its mediation mandate. The Organization must also develop closer partnerships with regional actors and groups involved in mediation, while at the same time cultivating an overall environment that rejected sowing seeds of bitterness, hatred and vengeance.

He reaffirmed his Government’s conviction that there was a need to strengthen the multilateral system and ensure that relevant mechanisms operated in a swift and efficient manner. Indeed, nations acting unilaterally would be hard-pressed to defeat a robust multilateral system that could respond effectively with comprehensive solutions. To that end, he was pleased to note that one of the main priorities of the Assembly’s sixty-sixth session was to press ahead with Organizational reform. In addition, the establishment earlier this year of the Change Management Team had been a step in the right direction, especially since it came at a time when Member States were calling on the Organization to play a more prominent role in building a global culture of transparency, accountability, good governance and enhanced democratic participation.

Turning to other matters, he said that small developing countries continued to struggle with the fallout from the economic and financial meltdown that began in 2008. That situation, coupled with ongoing effects of climate change and natural disasters, continued to threaten the economies in those countries and undermine their efforts to achieve the Millennium Development Goals. While Vanuatu had made some progress in that exercise, much remained to be done, through, among other avenues, pooling its national resources and engaging the international community to coordinate broader development initiatives. Vanuatu’s economic growth had slowed since the outbreak of financial turmoil, sparked by the 2008 mortgage meltdown. The results of such outside shocks had eroded Government revenues and put further strain on Vanuatu’s economy.

Thus, significantly increased financial support was needed from development partners, he said. While previous assessments of Vanuatu’s status as a small island developing State by the United Nations Committee on Development Policy had shown a “progressive development pace”, and its graduation from that status might be imminent, the Assembly must recognize that the challenges such countries faced were permanent. Indeed, small size, remote location, extreme vulnerability to natural disasters, and susceptibility to sea-level rise were but a few of Vanuatu’s permanent challenges. He, therefore, urged the United Nations to ensure that its mechanism for graduation for the least developed countries category did not ignore such realities. He similarly called on the world body and the wider international community to assist vulnerable communities with adaptation and mitigation measures to avert the “impending global disaster of climate change”.