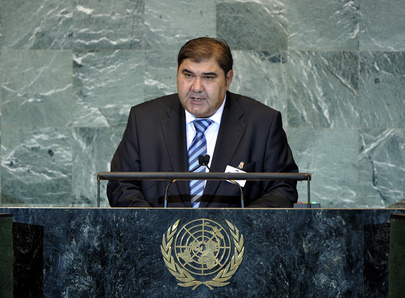 ELYOR GANIEV, Deputy Prime Minister and Foreign Minister of Uzbekistan, said in the 20 years since his country’s independence, it had turned from a lopsided hypertrophied economy into a modern place of steady development. Despite the ongoing global financial crisis, Uzbekistan had secured implementation of the Millennium Development Goals. “The last five years the GDP growth made up, on average, 8.5 per cent and this year it is expected that the achieved level shall be preserved,” he said. Uzbekistan now used 60 per cent of its budget for health care, education, communal services, social protection and other social programmes.

He said that education, spending for which made up 10 to 12 per cent of Uzbekistan’s budget, played a significant role in the country’s growth. Its mandatory 12-year education, introduced in 2009, an establishment of more than 1,600 modern professional colleges and academic lyceums, had helped bring indicators not often seen in the world. The country was moving steadily towards its goal of joining the ranks of modern developed and democratic States, ensuring its people high living standards and a commendable place in the world community.

Central Asia’s political and strategic significance, along with its rich natural resources, remained the focus of the world community. Ongoing conflict in Afghanistan remained the most destabilizing factor, not only in the region, but also in the entire world. “It is necessary to especially underscore that, today, no one has any doubts that there is no military solution to the Afghan problem,” he said, adding, Afghans must resolve their country’s problems on their own through compromise. The events in Kyrgyzstan of June 2010 were also a serious challenge to stability in the region, and until investigations are carried out and the perpetrators punished, it was difficult to expect restoration of trust and cooperation between the Uzbek community and the Kyrgyzs.

Socio-economic development of Central Asia was also influenced by the environmental disaster of the Aral Sea, which was turning into “a drying and disappearing pond”, he said. Any action using transboundary rivers also had to take into account the interests of all States in their basin, as well as international law. “In these circumstances, the attempts to implement the projects on construction of the giant hydro-facilities at the upper stream of the Amudarya and Sydarya rivers is counterproductive and dangerous,” he said. “We do not ignore the rights of the upper stream countries to develop their hydropower sector. In our view, it would be rather rational and safer to build the cascades of small hydropower facilities with the same total capacity for power generation.”