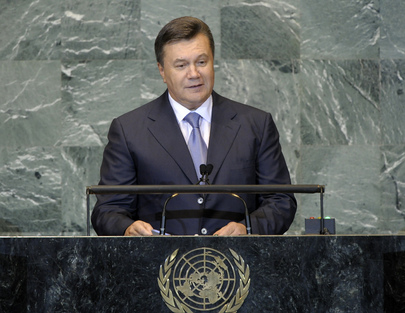 VIKTOR YANUKOVYCH, President of Ukraine, said that preventing armed conflict and the consequent loss of human life and suffering had been one of the cornerstones of his country’s Security Council membership in 2000-2001.  Preventive diplomacy and mediation at the regional and international levels remained an integral part of Ukraine’s foreign policy.  During armed conflict, top priority must be given to human rights, he emphasized, noting that his country had been among the first to carry out a humanitarian mission in Libya at the beginning of 2011.

At the twentieth anniversary of independence, his country had implemented sweeping reforms, crystallizing its position on defending human rights, as seen from its membership in the Human Rights Council from 2006 to 2011, he said.  While chairing the Council of Europe’s Committee of Ministers from May to November 2011, Ukraine had also focused on children’s rights, and on developing local self-governance and the rule of law.

Ukraine also stood as an example, he stressed, recalling that his country had voluntarily abandoned its nuclear weapons and stockpiles of enriched uranium.  To raise awareness of nuclear safety, he added, he had convened the Kyiv Summit and welcomed the upcoming High-level Meeting on Nuclear Safety and Security in support of irreversible nuclear disarmament.  His country insisted on legally binding security assurances for non-nuclear and non-aligned States.  “I urge leaders of other States to consciously follow the example of Ukraine and its real actions to promote disarmament and non-proliferation,” he said.  Expressing support for United Nations peacekeeping reform, he recalled that 34,000 Ukrainian soldiers and police had participated in United Nations peace operations over the last 20 years.

Turning to the Millennium Development Goals, he emphasized his country’s commitment to its own national goals, saying its main priorities were poverty reduction, ensuring quality education, environmental protection, improving health, reducing child mortality, curbing HIV/AIDS and tuberculosis, and ensuring gender equality.  Climate change and environmental preservation required more attention, he said, stressing the relevance of a proposal to create an effective international environmental-protection mechanism.  He also called upon Member States to study the idea of developing a new universal instrument that could serve as an “environmental constitution”, giving all countries clear guidelines and identifying compulsory sustainable-development principles.

Global approaches were also needed in the energy field, and to prevent new challenges to the global financial sector, he said.  In addition, there was a need for effective international mechanisms to counter security threats arising from natural and man-made disasters.  Ukraine looked forward to strengthening the competent specialized United Nations agencies and improving their efficiency.  The General Assembly should be more involved in international life and strengthen its voice on a wide range of global issues, he emphasized, adding that Ukraine was open for discussions on all progressive concepts of United Nations reform, including modernization of the Security Council, he said, calling for the addition of at least one non-permanent seat for the Group of Eastern European States on an expanded Security Council.