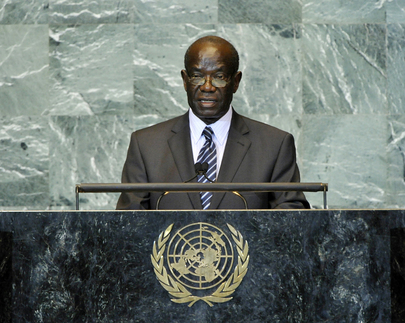 EDWARD KIWANUKA SSEKANDI, Vice-President of Uganda, said the theme of this year’s general debate — the role of mediation in the peaceful settlement of disputes — was particularly appropriate in light of ongoing conflict situations around the world, including in Africa. Strategic interventions, such as mediation, were necessary to mitigate conflict situations and avert crises that threatened not only nations, but entire regions with the adverse effects on development and livelihoods. The Ugandan Government consistently advocated for a strengthened role for subregional and regional organizations in conflict prevention and resolution. For its part, Uganda had been involved in the Burundi Peace Process, as well as the negotiations led by the Intergovernmental Authority for Development (IGAD) on the Sudan Comprehensive Peace Agreement, which culminated in South Sudan’s birth and its current participation as an equal partner in the community of nations.

In addition to its contribution through the African Union Mission in Somalia (AMISOM), Uganda supported the engagement of the Somali Transitional Federal Government with other actors in the context of the Djibouti Peace Agreement and the Kampala Accord, he said. To consolidate gains realized on the ground, the United Nations must, with the rest of the world community, urgently support capacity-building in the Somali Transitional Federal Institutions. It should also deploy the additional authorized 3,000 troops and approve predictable funding mechanisms, along with required aviation assets to the Union’s mission. More broadly, peace initiatives should be regionally based with strong support from the United Nations. Peace must sometimes be prioritized before justice. Peace and reconciliation mechanisms must be set up to heal wounds, and post-conflict recovery and reconstruction programmes should be instituted simultaneously.

Underscoring mediation as a worthwhile investment, he said it cost much less than other options, such as peacekeeping or peace enforcement, while averting the worst consequences of unnecessary war. Uganda further believed that differences arising between and within countries were best addressed through home-grown solutions. External influences or interventions did not necessarily offer sustainable solutions to conflict resolution, which tended to contribute to a cycle of destabilization. Thus, the United Nations, the international community and other actors must fully take into account the interests and concerns of all parties concerned. Support should be targeted to areas mutually agreed upon with those parties, and should also be timely, adequate and robust. It was equally important to build and strengthen the mediation capacity of the subregional and regional organizations, he said.

In the specific cases of African conflicts, he underscored Uganda’s preference for peaceful dispute settlement through mediation, rather than military intervention, noting that the African Union had called on the National Transitional Council to establish an all-inclusive transitional Government as proposed in the Union’s road map. The Ugandan Government believed that Africa should be given the chance to resolve her own conflicts. It had the strong political will to handle them, and it was imperative that the continent’s partners recognized the existing dispute resolution mechanisms of regional bodies. He called on the United Nations to fully support Africa in that regard. He also underlined the role of women in mediation, saying it should be appreciated and enhanced. Finally, he urged the Israeli and Palestinian parties to urgently resume negotiations in order to reach a two-State solution that will guarantee a durable peace.