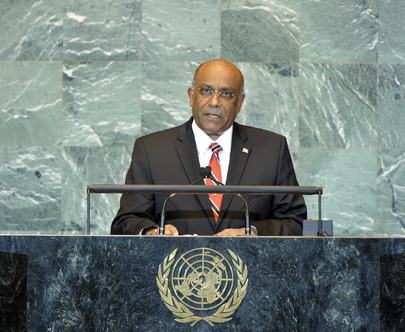 SURUJRATTAN RAMBACHAN, Minister for Foreign Affairs and Communications of Trinidad and Tobago, greatly supported the Assembly’s focus on mediation as a way to peacefully settle disputes, noting that the it was meeting at a time when people everywhere were seeking more direct roles in governing their societies and were prepared to die for the cause of freedom from tyranny and for democracy. Restless, alienated youths were challenging leaders to bridge the gap between old cultures and traditions of governance with new aspirations. “There will be no future that is peaceful unless youth cynicism is addressed,” he said. Politically, the age of totalitarianism and anti-democratic leadership styles was over. The world must now more than ever allocate its resources equitably, ethically, sustainably and transparently.

The Middle East conflict should be settled peacefully, he said. He supported the Palestinians’ quest for their own State within secure borders alongside Israel. The United Nations must continue to show leadership and work with the Arab League and other entities to resolve the Israeli-Palestinian conflict. At the initiative of Trinidad and Tobago’s Prime Minister, last year, the Assembly had adopted a resolution on women, disarmament, non-proliferation and arms control. He lauded the Organization’s decision since then to set up UN Women. Women must be involved in all dispute settlement and conflict prevention processes. Their absence in the process could result in the development of peace agreements that were not comprehensive in scope and that did not address issues which affected women during and after conflict.

Last week, he noted, Trinidad and Tobago’s Prime Minister, together with other States, the United Nations Development Programme (UNDP) and UN Women, had co-hosted, on the margins of the Assembly, a high-level colloquium on women’s political participation. The Prime Minister and other leaders had signed a declaration on advancing such participation. He hoped that the event’s outcome would foster greater global consciousness and discussion on women’s participation in Government and advancement of democracy globally. He called on Member States to implement the resolution on women, disarmament, non-proliferation and arms control. He also welcomed greater efforts to recruit lead mediators from developing countries, particularly small island developing States.

Youths were very susceptible to the negative effects of strife and must be protected, he said. In addition to bringing to justice those accused of recruiting and enlisting children into armed forces, it was essential to create mechanisms to rehabilitate young people who survived conflict so they could reach their fullest potential and help develop their own societies. He called on States that were in a position to do so to contribute to the United Nations Children’s Fund (UNICEF), the International Committee of the Red Cross (ICRC) and the Victims Trust Fund of the International Criminal Court. He stressed the need to adequately resource the Department of Political Affairs and its Mediation Support Team. Trinidad and Tobago and its Caribbean Community (CARICOM) partners had been very active in the meetings of the Preparatory Committee of the 2012 conference to negotiate a text on an arms trade treaty. That treaty must include adequate provisions for the peaceful settlement of disputes.