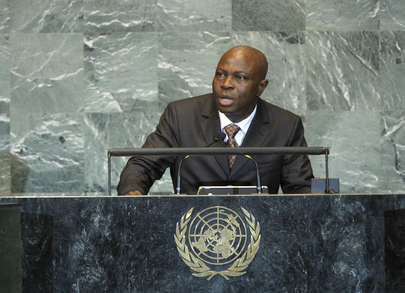 GILBERT FOSSOUN HOUNGBO, Prime Minister of Togo, said that the ever increasing number of challenges each country faced required all nations to work together more closely and with more dedication to ensure broader peace, stability and development. Togo, for its part, had taken strong measures to jumpstart its economy, promote social growth and ensure democratic progress. Following recent elections, it had made a firm decision “to claim victory for the people, rather than for a particular political party”, as a way to consolidate gains and ensure an open and inclusive society. In addition, the two year-old Truth, Justice and Reconciliation Commission was presently holding public hearings on some of the most painful moments of the country’s history. For that exercise to be meaningful, the Togolese people needed to “talk to each other and tell the truth about the past”, so the young democracy could turn the page on that past and move forward.

He said his Government had also pledged to tirelessly pursue the gains of democracy and peace, including through the broad promotion and protection of human rights and pursuit of the Millennium Development Goals. In terms of economic governance, Togo was instituting legislation aimed at reaching the end of its Heavily Indebted Poor Countries (HIPC) Debt Initiative obligations and ensuring debt cancellation of nearly $1 billion. It was also pressing ahead with efforts to rebuild roads and other infrastructure, he said, thanking all development partners that had helped.

On conflict resolution and prevention, he was encouraged to note that significant progress had been made in that regard in Africa, particularly in countries such as Côte d’Ivoire and Sudan. Those nations had proved that obstacles could be overcome when concerned parties acted with commitment and dedication. Yet, in countries where people were expressing the desire to break free from oppression, he hoped that such processes would end peacefully while also achieving the aims and aspirations of the concerned citizens. Turning briefly to the situation in the Middle East, he urged similar peaceful negotiations to comprehensively settle the situation between Palestinians and Israelis.

Continuing, he said that crisis and conflict, as well as new threats to international peace and security, such as cybercrime and piracy, required the international community to rethink the United Nations role in the areas of security and economic development. At a time when West African countries were locked in a struggle against drug traffickers, they needed regional and international cooperation to simultaneously tackle incidents of piracy off its shores. The United Nations must be reformed and efforts to revitalize the Security Council should proceed apace, with the aim of correcting “flagrant injustices”. Such change would also ensure that the 15‑nation body was better placed to address current challenges.

He went on to note that Togo was among three African countries vying for two seats in the upcoming round of elections for non-permanent members to the Council. As such, he urged Member States to cast their ballots with the recognition that the Council must maintain regional balance within Africa, including West African representation. If elected, Togo would focus on preventive diplomacy, peaceful dispute settlement, the link between security and development, and on emerging international threats. That noble ambition could only be fulfilled if its candidacy was supported by Member States, and he urged delegations to show such support.