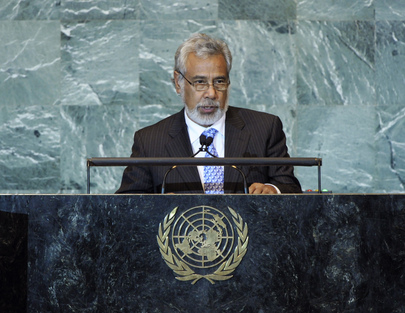 KAY RALA XANANA GUSMÃO, Prime Minister and Minister for Defence and Security of Timor-Leste, opened by thanking Member States for their support in rebuilding his country’s institutions, saying Timor-Leste had come a long way as a people and as a State, replacing intolerance with constructive dialogue, and the right to protest with the duty to protest responsibly. Over the last four years, the country had been strengthening the institutional capacity of its public administration to defend the best interests of the State, improve public service delivery and promote good governance. It was also reforming public-finance management and creating an Anti-Corruption Commission. Additionally, the country had begun to develop the capacity of its private sector by promoting competence, professional honesty and technical skills.

He said that across the country, investments had been made in agriculture to increase the sector’s productivity. It was also investing in local and decentralized development programmes, which focused on minor infrastructure projects to promote employment for young people in rural areas. Those measures had contributed to economic growth and helped create jobs in the capital, Dili, as well as in rural areas. They had also encouraged confidence in State institutions, leading to a spirit of optimism that had contributed to a change in mindsets.

As a result of good governance and the prudent use of revenues, Timor-Leste had recorded double-digit growth in the last few years, he said, adding that the country was on the right path to maintain that growth. The institutions established to support the Timor-Leste Petroleum Fund would become stronger, ensuring responsiveness and greater quality of work and execution. Additionally, having achieved its goal of stability, the country was in a position to prepare a 20-year strategic development plan that would replace the annual plan, he said. It would cover three vital areas: social capital, infrastructure and economic development. “We want to shift from an oil-dependent economy to a non-oil-dependent economy.”

He said Timor-Leste was trying to be more active in the region and in the world, to show that it was possible to leave behind or close a long period of conflict and focus on humanist ideals of political and social tolerance for the dignity and development of all. That was why the county was intent on joining the Association of South-East Asian Nations (ASEAN), he said. On aid effectiveness, he said it would be difficult for some developing countries to meet the Millennium Development Goals by 2015 because they faced daily challenges and difficulties in combating maladministration. Poor countries also needed a message of confidence, since all they heard about was transparency and accountability, he stressed, urging a change in attitudes.