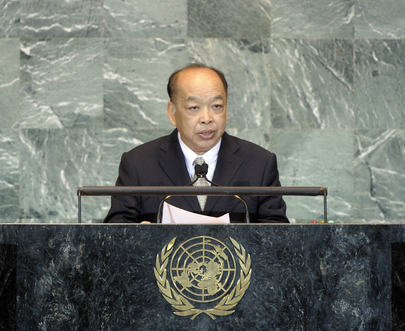 SURAPONG TOVICHAKCHAIKUL, Minister of Foreign Affairs of Thailand, said that after its political unrest, his country had taken another step forward in its democratic process. General elections in July this year went smoothly and the new Government had been successfully formed, with a solid mandate from the people. “We seek to bring about a strong, equitable and sustainable economic infrastructure in the country. More importantly, this Government is determined to promote reconciliation and uphold the rule of law to serve as a basis for harmony and unity within the country,” he said. Thailand would further enhance cordial relations with neighbours, as well as friends beyond its region, with a special emphasis on promoting trust, confidence and mutual respect. The international order must be more inclusive and responsive to all States and civil society, and, in changing times, a reform of global governance was needed. On peace and security, he believed the peaceful resolution was the most desirable and cost-effective approach — both in terms of human lives and financial costs. To that end, political will remained the key ingredient to peaceful resolution of disputes, but in many instances, deployment of peacekeepers was still necessary. Wishing to do its part, Thailand had supported over 20 peacekeeping missions and was about to deploy military officers to a United Nations mission in Kashmir. Since autumn 2010, Thailand had dispatched two counter-piracy task groups to join efforts to protect ships from pirate attacks in the Gulf of Aden. But, a key foundation for durable peace was sustainable development; ever since the financial crisis of 1997, Thailand’s “people-centred approach” had helped ensure its people were able to cope much better with subsequent crises. Thailand’s Government was working to ensure free primary and secondary education and universal health-care coverage, resolutely pursuing development beyond the Millennium Development Goals. It was also seriously preparing for participation in next year’s “ Rio+20” conference, aiming to move forward economic and social development and environmental conservation in a balanced and integrated manner. Thailand also strove to play a constructive role in human rights, especially through membership of the Human Rights Council. Thailand was proud to have led the crucial task of reviewing the Council’s work to make it more relevant during its presidency; the Arab Spring phenomenon revealed human rights could only thrive in democracy. Without democracy, fundamental human rights were at risk. Further, respect for human rights could not be imposed from outside. Such values must be developed and nurtured within, in accordance with the readiness and aspirations of the people. Meanwhile, Thailand was also undergoing its first universal periodic review this October and was determined to continue playing a constructive role in the Human Rights Council. In that regard, it would proudly stand for election again for the 2015-2017 term. Thailand also attached special importance vulnerable groups such as children, women, persons with disabilities or the elderly. In the area of women’s rights, the General Assembly last year adopted the United Nations Rules for Treatment of Women Prisoners and Non-Custodial Measures for Women Offenders - the “Bangkok Rules” – which arose from the initiative of Thai Princess Bajrakitiyabha. Moreover, the recent election of the country’s first female Prime Minister confirmed Thai society was open to women and promoted gender equality.