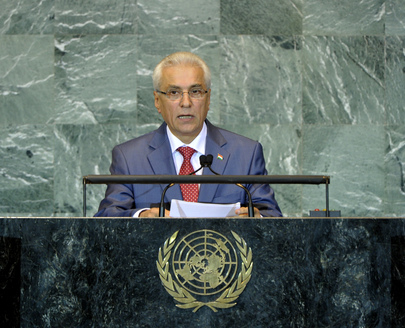 HAMROKHON ZARIFI, Minister for Foreign Affairs of Tajikistan, said his country was focusing on energy and food security, as well as overcoming its transportation and communication isolation. But agriculture in the region had in recent years suffered a plague of locusts and other natural disasters, requiring more efficient international assistance. Trade and direct investment could also be instrumental for sustainable development and, in that regard, his country sought support for accelerating the process of its accession to the World Trade Organization.

He said that 60 per cent of Central Asia’s water resources originated in Tajikistan, but more than 35 per cent of glaciers there had disappeared over the past 30 years. Tajikistan had submitted a proposal to establish an international fund on saving glaciers in that strategically important area. Climate change could not be resolved without collective effort, and it was his country’s hope that Member States would support that initiative.

For more than 10 years, Tajikistan had experienced a severe shortage of electrical supply in winter, he said. It was vitally important to develop the huge potential of its hydro-sector in a consistent and complex manner, and his country was prepared to closely cooperate on issues of rational use of water and energy resources with all in the region. To resolve the crisis of the degradation of the Aral Sea, countries in the region also needed to invest huge capital in the water sector and reduce the area of irrigated lands with high water absorbency. Water, an essential natural resource, should unite rather than divide, and Tajikistan had initiated a proclamation of 2013 as International Year of Water Cooperation.

The situation in Afghanistan was a great concern for Tajikistan, and he expressed heartfelt condolences on the assassination of former President Burhanuddin Rabbani. Tajikistan supported the international strategy for a comprehensive resolution to the situation in that country, and believed its trade and economic cooperation with neighbouring States was an important factor in its rehabilitation. Five bridges had been commissioned at the border between Tajikistan and Afghanistan, and a 220 kV power transmission line had been completed between the two countries.