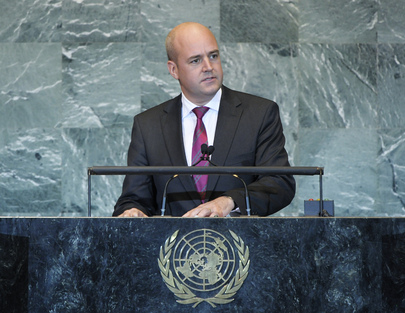 FREDRIK REINFELDT, Prime Minister of Sweden, said that important progress had been made since the adoption of the Millennium Development Goals. Poverty had declined in many countries, and was expected to fall below 15 per cent globally by 2015. Strides had also been made in areas, including child mortality, education and new HIV infections. But, there was a long way to go to raise standards of living and offer equal opportunities to people around the globe, he said, adding that today, he wished to focus on one related area: “the unmet human, economic and social rights for 3.5 billion women and girls”. He noted that women performed 66 per cent of the world’s work, but earned only 10 per cent of its income, and 1 per cent of its property. Some 70 per cent of the world’s poor were women or girls. And while the General Assembly had witnessed a historic step this week as its general debate was opened — for the first time — by a woman, still many countries did not even allow women to vote. Only 19 women were currently leading their countries as elected heads of State or Government.

Those shortfalls were not only a loss for the women affected, he continued, but for society as a whole. Closing the gap between male and female employment rates would have “huge implications” for the global economy. It would boost American GDP by as much as 9 per cent, that of the Eurozone by 13 per cent, and that of Japan by 16 per cent. It would also be an investment for the future, he added, noting that there was evidence that when women took control of a household’s income, more money was spent on children’s needs, such as food, health and education. Moreover, when women took a greater part in society, there were clear improvements for the public good and less corruption. He urged Member States to imagine what it would mean for the economic growth of their own countries if women were allowed to fully participate in society.

“Today, ideas of freedom and democracy are spreading at the speed of sound,” he said of recent political movements in the Middle East and North Africa. Some were trying to put out roadblocks to those movements, and the United Nations must play a leading role in embracing and maintaining those new roads towards democracy and freedom. The United Nations Special Rapporteur on the promotion and protection of the right to freedom of opinion and expression had recently concluded that there must be as little restriction as possible to online freedom of expression, he recalled. Sweden, together with 40 other nations around the world, strongly supported that conclusion by launching a special Initiative for Democratization and Freedom of Expression.

He stressed that the movements of the Middle East and North Africa must have international support. Where there were threats of genocide, war crimes, ethnic cleansing or crimes against humanity — when autocratic rulers, like that in Syria, turned their guns on their own citizens — the international community had a responsibility to protect civilians, he added. Sweden hoped to play its role in the current decisive phase in the Middle East, and was contributing to the implementation of Security Council resolutions 1970 (2011) and 1973 (2011) on Libya. It was providing substantial humanitarian support to several countries in the region.

The European Union was firmly committed to Israel and Palestine living side by side with each other in peace and security. “We all want to see the peace process resume,” he stressed, adding that violations of international law must end. He went on to point out that the Horn of Africa was suffering its worst famine in 60 years, and said that the United Nations needed the full support of the international community to improve its response capacity. For its part, Sweden would do its utmost to support a strong United Nations through substantial contributions to humanitarian and development assistance and to its work for peace, security and human rights. It also wished to help revitalize the Organization’s work on disarmament and non-proliferation. Together with its co-chair, Mexico, it would therefore work hard to advance the entry into force of the Comprehensive Nuclear-Test-Ban Treaty. Finally, he said Sweden had presented its candidature for a seat on the Human Rights Council for the period 2013-2015. As a member of that body, it would contribute actively to making the Council a more “efficient and active” body.