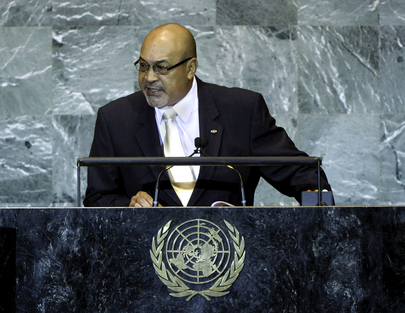 DESIRÉ DELANO BOUTERSE, President of Suriname, said the perils of AIDS, malaria and non-communicable diseases, terrorism threats, climate change and the vulnerability of women and youth were among the reasons to deepen cooperation and strengthen international institutions. Achieving social justice for all represented the most basic humanitarian challenge. “We must stand united behind the collective goal to preserve our world for current and future generations,” he said. For Suriname, with its low-lying coastline of fertile farming soil, climate change meant vulnerable exposure to rising sea levels, which could devastate its ability to produce food. It was important, for countries such as Suriname, for the international community to honour its commitments and realize a speedy implementation of the Cancun agreements on the Special Climate Change Fund and the Adaptation Fund. He called on all parties to reach agreement in Durban.

He said his country stood at a crossroads regarding sustainable development. He resolved to promote investment-friendly environments, with prudent fiscal and monetary policies aimed at securing macroeconomic stability. The main objectives of Suriname’s development strategy included further developing the mining sector, moving away from a commodity-based economy and investing in human capital as its most important resource. International cooperation would complement national development policies. He affirmed support for the regional Caribbean Community (CARICOM) and Union of South American Nations (UNASUR). He was pleased with the latter’s decision for a complete restructuring of the international financial system. “The time has come to bring an end to the practice of decision-making by only a few, with disastrous consequences for the majority of the peoples of the world,” he said.

The theme of mediation was timely, since it could and should become one of the most effective instruments in international conflict resolution, he said. Failure to recognize and apply the principles of equity and justice in international relations had resulted in unacceptable situations, including poverty, criminality and environmental destruction. Acts of war and intervention also persisted. Armed conflicts were sometimes preceded by a Security Council mandate, with disregard for the consequences of destruction, loss of lives and human suffering. He drew urgent attention to Article 33, Chapter 6 of the United Nations Charter, which had not been fully applied, resulting in an unnecessary continuation of violence on the African continent.

Meanwhile, he said, Somalia was suffering a severe famine, taking thousands of lives, begging the world to wonder if the architects of the acts of war on that same continent, under the pretext of protecting human rights, could have better used those precious resources in the fight against famine. Furthermore, the Security Council should be a forum for dialogue and actions, and should not be permitted to bypass the efforts of regional institutions, which aimed to promote the peaceful settlement of disputes.

Turning to other areas of grave concern, he called upon the international community to honour its pledges to support the Haitian people. He then reaffirmed the right of Palestinians to self-determination, including the right to an independent State. Suriname also was concerned about the embargoes against Cuba, calling on Member States to reject any future blockades. “We must ensure that unity and justice reign among all nations,” he concluded.