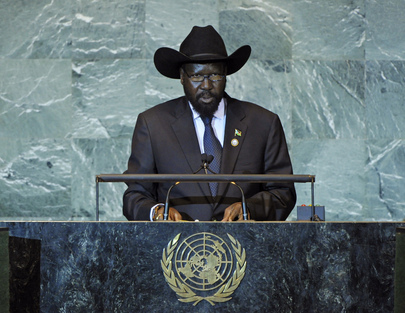 SALVA KIIR, President of South Sudan, called his appearance at the General Debate yet another milestone in the long list of his country’s achievements and thanked the “many friends in this great hall” who helped the country get to this point. After a total of more than five decades of conflict, however, his country stood in dire need of all the help it could get. “Even before the ravages of war could set in, our country never had anything worth rebuilding,” he said. “Hence, we characterize our post-conflict mission as one of construction rather than reconstruction,” he said, appealing for the overwhelming support that greeted independence to be translated into tangible development assistance.

His country, he noted, was endowed with oil and mineral wealth, but hardly anything had been produced there by the people of the country, and he was determined to diversify the economy, lessening the precarious and near-total dependence on oil, and using that resource as a catalyst to unlock potential in other areas, especially agriculture. The ambition of his people was to transform their country into “a regional agro-industrial powerhouse”, and that goal would be very difficult without appropriate assistance. “Much as we need external assistance, it is our passionate wish that it will be offered on terms that will also respect our political and economic choices.”

Peace and harmony was a prerequisite for development, he acknowledged, and he pledged to promote peace and harmony domestically in the region. He said that inside the country, inclusive executive and legislative organs had been set up, despite the fact that his party, the Sudan People’s Liberation Movement (SPLM) won in a landslide in the last elections. Externally, he affirmed that his country fully adhered to the sovereignty and territorial integrity of all States, including the Republic of Sudan. He categorically restated that South Sudan had not, and would not, interfere in any domestic conflict in that country. However, he urged peaceful resolution of conflicts that could spill-over to affect his country’s own security. For that reason, he emphasized that the reinstatement of the recent Addis Ababa Framework Accord on the situation in Southern Kordofan and political relations between the Government and the opposition could go a long way in bringing about stability in the region.

For the same reason, he said, his country hoped to expeditiously resolve the outstanding issues that had carried over from the Comprehensive Peace Agreement, and he urged the Government of Sudan to consent to the speedy demarcation of the border between their two States with the help of the international community. In that regard, he appealed to Sudan to agree to the submission of the dispute over the ownership of a number of border areas to international arbitration. Applauding that States cooperation with the establishment of the United Nations Interim Security Force in Abyei (UNISFA), he hoped that agreement would soon be reached on that area in line with the comprehensive agreement. He stated that his country was ready to continue serious negotiations with Khartoum on arrangements to guarantee Sudan a fair income from the use of the country’s export infrastructures.

In terms of governance, he said that progress had been made in rectifying some defects and reinforcing accountability and transparency, and ultimately curbing corruption. In that context, a number of key bills, including one on public financial management, were making their way steadily through the legislative process. In conclusion, he said that “the new Republic of Sudan vows to become an active member of the family of nations, making its contribution to fostering world peace and prosperity for the benefit of all humankind.”