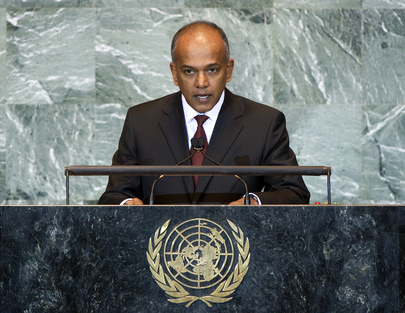 K. SHANMUGAM, Minister for Foreign Affairs and Law of Singapore, said the difficult times since the global economic crisis had been compounded by natural and man-made disasters of growing scale and severity.  The repercussions of those events had given rise to unpredictable outcomes.  Today, Governments must grapple with the challenge of reviving growth and creating jobs amid fears of a double-dip recession.  Longer-term issues like sustainable development, climate change and water security must be tackled along with immediate concerns of food security and job creation.

With almost 7 billion people to feed, “this is a stark reminder of the magnitude of our task”, he said, underscoring that the United Nations, World Bank, International Monetary Fund (IMF) and World Trade Organization could help ensure that the global economic framework was conducive for growth.  Citing a World Trade Organization report showing that the Group of 20 (G-20) countries had introduced 122 new trade restrictive measures between 2010 and April 2011, he said the United Nations should take a strong stand against such measures, as fighting protectionist pressures collectively was important for the sustainability of economies.

Due to its sheer size, the United Nations would need time to achieve consensus and make decisions, he said, which left the door open for ad hoc coordination by smaller, informal groups, like the G-20 or the Group of Eight (G‑8), which might be more efficient in decision-making.  A certain amount of fluidity “is a given” in global governance, in order to tackle increasingly complex problems.  But, ultimately a balance must be struck between efficiency and genuine legitimacy.  The United Nations must act together with such groupings as complementary parts of the international system, not as mutually exclusive competitors.

On food and water security, he said the United Nations was doing a great deal in both areas to foster collaboration among States, but on the issue of water, it could do more to build synergies of technology, policy and capacity.  Since 2008, Singapore had regarded water as a strategic resource and had invested considerable resources into testing new technologies.  “We would be happy to share our experiences,” he said, adding that Singapore was a member of the Green Group, whose members discuss ways to augment collective experiences in water management.  On other matters, he said there was a disconnect between the “proliferation” of resolutions generated each year and present realities, underscoring the need for more coordination between New York and the field.  Timelines and objectives should be set on some resolutions and other texts should be retired.

Turning to the Global Governance Group, he said that grouping sought to act as a bridge between the United Nations and the G-20, focusing on areas of potential cooperation and calling for renewed commitment to a universal, rules-based, non-discriminatory multilateral trading system, which was key to achieving food security.  As the only universal international organization, it was uniquely placed to influence the future.  However, “we should not take this position for granted,” he cautioned, as globalization and economic integration had redefined global governance and decision-making since 1945.  The United Nations must adjust to that new environment and it was up to Member States to rally the political will to set aside narrow self-interests and act for the collective good of future generations.