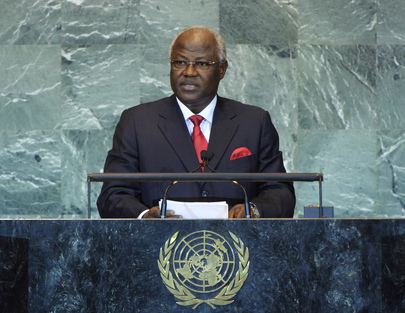 ERNEST BAI KOROMA, President of Sierra Leone, said his country’s commitment to democracy, prosperity and international peace had been seen in its 50 years as an independent nation. Sierra Leone was proud of its distinctive contributions to the United Nations in such areas as decolonization, training and research, disarmament and non-proliferation, and peacekeeping, to name a few. Its commitment to international peace had been seen in its transformation from a nation that hosting one of the largest United Nations peacekeeping missions in the late 1990s to one that contributed troops and police officers to the mission in Darfur. It had also proposed participating in the African Union Mission in Somalia (AMISOM).

Sierra Leone had made steady progress in the areas of agriculture, energy, infrastructure, health and education, which had been identified in the Government’s “Agenda for Change”, he said, adding that those gains had been made despite rising food and fuel prices. Having identified 2011 as “The Year of Implementation for Sierra Leone”, the Government was working to ensure that every person benefited from the well-earned peace and democracy “dividends”. It was to be hoped that projects and programmes under the United Nations Joint Vision for Sierra Leone would help the country attain the Millennium Development Goals.

Despite budgetary hurdles resulting from the global economic meltdown, Sierra Leone was optimistic about its future growth, he said, adding that he expected exports to increase, given the substantial investment in infrastructure. The Government had put strong corrective measures in place to stabilize the fiscal situation, and had also made progress in the area of peace consolidation, with bodies such as the National Electoral Commission and the Anti-Corruption Commission continuing to make gains. Furthermore, the Government had established the Human Rights Commission and its national report had been presented to the United Nations Human Rights Council’s Working Group on Universal Periodic Review.

Pointing out that he had launched a process by which women would hold at least 30 per cent of elected offices, he said that ahead of the 2012 presidential, parliamentary and local elections, Sierra Leone was aware of its primary duty to provide logistical requirements, but needed international assistance to support its commitment to a free, fair and peaceful vote. The Government continued its dialogue with all stakeholders, but national capacity-building programmes in peacebuilding and other priority thematic areas beyond the elections was crucial.

Sierra Leone was concerned about the illicit flow of small arms and light weapons across the subregion, and needed international assistance to eradicate their proliferation, he said. As for the role of mediation in the settlement of disputes, he said it should be used to the fullest extent. The greatest threat to security today stemmed from rising food and fuel prices, as well as from the fact that necessary sacrifices were increasingly placed on the shoulders of the weak. “We must act now to save the world from the anger of the weak and the excessive indulgence and repression perpetrated by the strong,” he stressed.