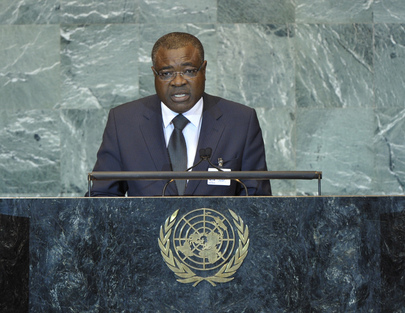 MANUEL SALVADOR DOS RAMOS, Minister for Foreign Affairs and Communities of Sao Tome and Principe, said this year’s theme of mediation was an opportunity to reflect on its impact in resolving conflicts, as well as the central role the United Nations should play in that process. That should then lead Member States to form concrete proposals that could strengthen the capabilities of the Organization in that area. The widespread use of mediation as a technique to resolve conflict had not always matched expectations nor produced expected results. Instead of international mediation settling for the status of peacekeeper, it must evolve to take on the role of a fundamental actor in peacebuilding. The United Nations would have the responsibility to take care of what appeared today to be the professionalization of international mediation, which was relegated to the background of the legal instruments ratified by specialized institutions to deal with the subject of the conflict at hand. For instance, the United Nations should take the necessary and important step to define the legal status of a mediator.

Concerning Libya, he said he regretted that there had not been a responsible partnership between the African Union and the Security Council to resolve that crisis. It was urgent to strengthen the United Nations role by reforming the entire system, including the Security Council and some of its specialized agencies, to align with the aspirations and demands of the modern world.

Welcoming South Sudan as the newest free and independent nation, he appealed to the international community to make a joint effort to support the new authorities. At the same time, a serious food crisis rooted in political and military conflict in parts of Somalia highlighted the duty of all Governments to contribute to that serious situation without delay. He appealed to the international community to provide more financial resources to support efforts to normalize the situation in the region. Turning to Western Sahara and Morocco, he hoped the two parties could negotiate, and urged the United Nations to proceed with a population census to complete the long-time process.

The uprisings in January that had swept across North Africa expressed the will of the people of Egypt, Libya and Tunisia, he said, urging Libyan authorities to conduct an inclusive process of peaceful transition. While the people of Bahrain, Syria and Yemen had demanded reforms in State institutions, the Israeli-Palestinian conflict continued. He reaffirmed support for the Palestinian people’s right to guide their destiny and advocated for the existence of a Jewish State. He appealed to the United States and the European Union to exert their influence in order for the Government of the State of Israel to stop the establishment of settlements in the occupied territories. Regarding Cuba, he urged the lifting of sanctions so that country could participate with other States in the process of building a more balanced and fair international society.

Global security was vital to sustainable development, he said, with risks ranging from piracy, transnational crime, trafficking weapons and drugs. Those threats required greater commitment to conflict prevention, management and resolution mechanisms. In addition, greater assistance was needed to confront the economic challenges facing small island States, including studying the effects of climate change in Sao Tome and Principe.

Addressing his concerns about Taiwan, he urged the relevant United Nations bodies to seek ways and means to ensure the participation of Taiwan in some of the United Nations system, in particular the International Civil Aviation Organization (ICAO) and the United Nations Framework Convention on Climate Change. He noted that his country had just concluded the consolidation of its democratic process, with the President having taken Office on 3 September. His Government was taking action to reduce poverty and promote economic growth and institutional reform. Sao Tome and Principe was also making significant progress towards the achievement of the Millennium Goals, especially in the areas of education and health. It was also eager to participate in efforts to mobilize the will and synergies for the noble principles and objectives on which the United Nations was based.