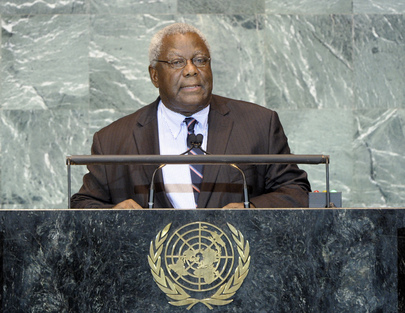 DONATUS KEITH ST. AIMEE (Saint Lucia) said the world economic situation was not the making of small island States, but it made a tremendous impact on them. “It continues to confound how the Member States of the Caribbean Community with the exception of Haiti — small island States with limited resources, population, land mass, and economies — can be classified as middle-income and therefore not eligible for special arrangements in finance and trade,” he said. Such categorizations put those countries at a great disadvantage for aid and trade packages, adversely affecting their development. He urged an understanding of challenges faced by countries such as Saint Lucia, which were vulnerable to natural disasters. “Almost every year, gains made during the first half of the year are eroded in the last quarter by weather-related phenomenon,” he said. Saint Lucia recognized oceans were vital for development, and it remained committed to sustainable development of coastal and marine resources. It had passed legislation for effective fisheries management, established a number of marine reserves, and was fortifying resilience to impacts of climate change through a building code and environmental impact regulations. Negotiations for the upcoming Rio+20 conference needed a strong focus on oceans, which were important for energy and food security to small island developing States and also regulated the global climate, he said. Those countries also yearned to enjoy benefits of renewable energy sources, but had not been able to develop their potential, so it was imperative that the international community assist achievement of energy security through renewable energy and energy efficiency programmes. “So far, the [small island developing States] have been largely overlooked, as investments go into larger economies where greater economies of scale and profits beckon,” he said. While efforts should be applauded to conserve the world’s forests to reverse desertification, consideration should also be given to small “tree stands” in small island developing States, as those were crucial to soil fertility, he said. And as a member of the Caribbean Community, which had spearheaded the recently concluded High-level Meeting on Non-communicable Diseases, Saint Lucia appreciated the commitment to address the issue. But it was necessary to set targets, implement programmes and measure success if progress was to be made “beyond just a meeting”. Like all others in the Caribbean Community, he said, Saint Lucia grappled with threats engendered by the illicit trade in firearms and narcotics. The country would spare no effort working towards a legally binding arms trade treaty that was robust and comprehensive. Saint Lucia also called to end the embargo against its neighbour, Cuba, as the blockade no longer fit into twenty-first century politics, economics or humanitarianism. He also urged the Organization to find suitable means to permit Taiwan to participate in its specialized agencies and mechanisms.