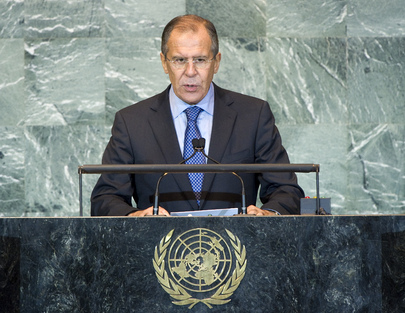 SERGEY V. LAVROV, Minister for Foreign Affairs of the Russian Federation, said that, just as a ship caught in adverse weather conditions needed a united team and a compass to take the right course, the international community today needed a combination of efforts to respond to common challenges and clear guidelines to strengthen the mechanisms of global governance.  The United Nations remained a pillar of international relations and equitable multilateral cooperation in the interests of all States.  It should, therefore, continue to provide political, legal and moral leadership in dealing with global challenges, including through the establishment of principles and standards of interaction, their monitoring and implementation, and the provision of assistance and support to States in need.  In that vein, however, wider international cooperation was needed to keep the global economic situation under control.  A significant contribution to the reform of the economy was being made by the BRICS States (Brazil, Russian Federation, India, China and South Africa).  For its part, the Russian Federation had made a proposal to elaborate a Convention on International Energy Security, he added.

The “logic of joint consolidated action” should also prevail in matters of security and the elimination of surplus nuclear weapons worldwide, he continued.  The Russian Federation and the United States had taken an important step when they signed the START Treaty and began its implementation; he thus called on all States with nuclear weapons capability to join that effort.  “We believe that further progress in nuclear arms reduction is possible only on a multilateral basis.”  Moreover, progress in that area was inseparable from coordinated efforts to move forward on all aspects of strengthening international security and strategic stability.  That included the development of universally acceptable approaches to the missile defence issues, accounting for the impact of strategic conventional arms, preventing weaponization in space, and eliminating qualitative and quantitative imbalances of conventional arms.

The deployment of strategic missile defence elements altered the overall configuration of international security, he said, adding that it was not enough to make statements that the increase in global missile defence capabilities would not undermine the basics of strategic security.  “The issue is way too serious,” he said.  Solid legal guarantees were needed that missile defence potential would actually be adequate to the declared objectives and would not disrupt global and regional balances.  It was of primary importance to prevent the undermining of the non-proliferation regime, he said, calling for the universalization of the Treaty on Non-Proliferation of Nuclear Weapons, the strengthening of International Atomic Energy Agency (IAEA) safeguards and the entry into force of the Comprehensive Nuclear Test Ban Treaty.  The early resolution to the nuclear problems of Iran and the Korean peninsula would contribute to the strengthening of the non-proliferation regime, he said.

The Collective Security Treaty Organization (CSTO) was a key tool to ensure stability within the area of its responsibility.  The signing of the Joint Declaration on Cooperation between the United Nations Secretariat and the CSTO in March 2011 was a major step in the collaboration between those two organizations, primarily in the field of peacekeeping.  The Russian Federation constantly called for interaction between regional organizations, under the auspices of the United Nations, to strengthen global stability based on the solid legal framework of the United Nations Charter, he added.  President Dmitry A. Medvedev of the Russian Federation had launched an initiative to sign a treaty on European security, whose practical implementation would allow the region to “finally draw the line under the post-cold war period”, establishing a universal and clear framework for issues including National Missile Defence and arms control, among others.

While giving special attention to the developments in the Arab world and condemning violence against civilians, the Russian Federation stressed that actions by outside forces in that context must be based on full respect for international law and be instrumental to the search for a political settlement between the authorities and the opposition.  The attempts to go beyond the Security Council’s mandate were unacceptable, since they undermined its authority and multiplied the suffering of innocent civilians.  The leading role in elaborating modalities for the post-conflict resolution in Libya must belong to the United Nations and the Security Council, he said, adding that it was time to lift the no-fly zone in that country.  In Syria, it was “inadmissible” to boycott proposals on a national dialogue, stir up confrontation and provoke violence, while neglecting the achievable — albeit late — reform proposals by President Bashar al-Assad.

He also touched on several other outstanding conflicts, including the Arab-Israeli standoff, the Cypriot conflict, and over the Nagorno-Karabakh region.  His country was also committed to preventing a repetition of the use of force in the Caucasus, as occurred in August 2008 as the result of a “reckless venture by the ruling regime in Tbilisi”.  The Russian Federation was ready to act as a guarantor of the non-use of force between Abkhazia, Georgia and South Ossetia, and would welcome the decision by the United States and the European Union to do the same.  Finally, turning to the question of reform of the Security Council, he recognized the need to adapt the United Nations to contemporary realities while preserving its interstate nature and the immutability of its Charter principles.  The Russian Federation supported a solution that would be based upon the broadest possible agreement.