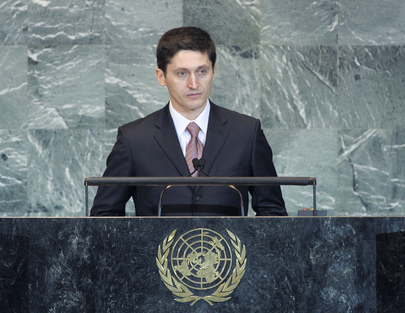 ALEXANDRU CUJBA (Republic of Moldova) noting the twentieth anniversary of his country’s independence and membership in the United Nations, recommitted the Republic of Moldova to the founding principles of the Organization and thanked the international community for its assistance over the years. Surveying developments of the past year, he stressed that global challenges required global strategies under the aegis of a strengthened United Nations that pragmatically adapted to new realities through an inclusive process of reform in strict accordance with the Charter. Given the challenges presented by the global economic crises, he said, it was critical that access to markets be opened up more for developing countries. His Government was working hard towards the extension and diversification of market channels in cooperation with partners, primarily in Europe. Openness, a constructive approach and fair-play were the best allies for “win-win solutions in global trade”. Also committed to human rights, the Republic of Moldova last year ratified the international treaties on disabilities and the Rome Statute of the International Criminal Court and was active in the Human Rights Council, committed to pursuing a balanced and objective agenda there. Advocating the earliest completion of a comprehensive convention on international terrorism, he noted that his country was hosting a regional counter-terrorism conference. Turning to the Transnistrian conflict that beset his country, he announced that five days ago the decision had finally been taken to unconditionally resume negotiations in the so-called 5+2 format involving the Russian Federation, OSCE, Ukraine, European Union and the United States, all of which he thanked for that development. He stressed, however, that a viable political solution could only be based on respect for the sovereignty and territorial integrity of the Republic of Moldova. The central question for the negotiations should be the special status of the Transnistrian region – with full respect for the needs, rights and freedoms of the local population – integrated within the country. In the past year, the Government had been working to restore railways and communications within the Transnistrian area. Noting unresolved issues in the Transnistrian area, such as the situation of Latin-script schools and the unjust imprisonment of Ilie Cazac, he said that the existing, military peacekeeping arrangement in the Republic of Moldova was not needed since the country had been at peace for 19 years. A multinational civilian mission, focused on confidence-building activities, would be more useful. A withdrawal of foreign forces and wide international support by mediators and observers was needed. Meanwhile, the absolute priority of the Government was deep reform, in the context of advancement on the path to European integration. He counted on the support of the United Nations and its Member States in advancing the political and economic development of his country.