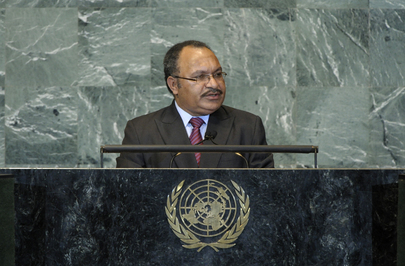 PETER O’NEILL, Prime Minister of Papua New Guinea, said his country had welcomed and formalized the concept of “One United Nations – Delivering as One”, as a model self-starter nation. That plan would enable a more effective and efficient way for the United Nations to deliver on its mandate. Beginning in January 2012, his country would also benefit from a new country programme targeting governance, social justice, health, education, gender, environment, climate change and disaster management.

He said his country had produced two Millennium Development Goal progress reports, indicating its achievement of some of the national targets, especially on poverty reduction and child mortality. Papua New Guinea was also progressing in the area of education, with enrolments in grades 1 to 6 increasing by 53 per cent. It had recently announced a free education policy from elementary to year 10, and a subsidized education policy from grades 11 to university, beginning in 2012. Additionally, the country was revamping its national health system. The new Development Strategic Plan 2010-2030 and Medium-Term Development Plan aimed to build and foster key enabling environments, bringing Papua New Guinea to the status of middle-income country. In that respect, he called on development partners to complement the nation’s efforts to achieve the Millennium Development Goals.

In the area of women’s empowerment, he reported that Papua New Guinea had recently passed the first vote on a parliamentary bill to provide 22 reserved seats for women to act as candidates in the upcoming elections in 2012. While the country appreciated the push by multilateral partners, such as the Asian Development Bank and the World Bank, on gender equality, it further urged them to support Papua New Guinea’s financial institutions by allocating funds without risk, to be lent to women entrepreneurs to develop business opportunities.

The Pacific remained a nuclear-weapon-free zone, he boasted, calling on the necessary Member States that had not done so to sign and ratify the Rarotonga Treaty. As the illegal use, abuse and dangerous proliferation of small arms and light weapons hampered the development aspirations of many nations, he called upon the international community to deal seriously with outstanding issues, such as the illegal supply and trade of small arms. Papua New Guinea remained committed to working closely with Governments and relevant international law enforcement agencies to curb drug and human trafficking and money-laundering.

As one of the top five remaining rainforest nations, Papua New Guinea was also committed to addressing the many challenges of climate change, biodiversity and sustainable development related to its forest and marine resources, he said. It further supported and encouraged the reform of the United Nations, its agencies and its Secretariat to become more responsive and active to global, regional and national challenges; he, therefore, reiterated the call for an expansion of membership in the Security Council’s permanent and non-permanent categories – which must take into account the geopolitical realities of today’s world. In terms of Papua New Guinea’s own contribution to the maintenance of international peace and security, he was pleased to announce the deployment of its uniformed personnel as United Nations military observers.

Additionally, he noted, as tuna was an important source of food and economic resources in the Pacific island States, Papua New Guinea and countries that were parties to the Nauru Agreement were determined to process tuna onshore and to add value and create employment for their people. He encouraged investment in onshore activities. He was conscious of the obligation to conserve fisheries through sustainable fishing. As Papua New Guinea continued to experience unprecedented economic growth levels of 6 to 8 per cent annually, he stressed that it was positioned to become a significant development partner in its region.