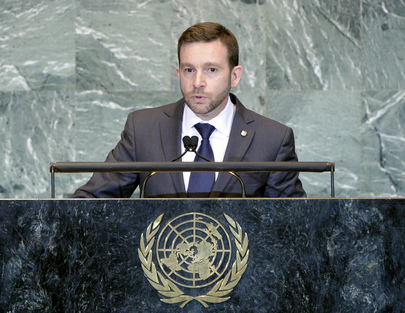 FRANCISCO ALVAREZ DE SOTO, Vice Chancellor of Panama, said his country was a multi-ethnic place where people of diverse races, cultures, creeds and languages coexisted in harmony and freedom. Panama believed that adherence to representative democracy and independence, as well as the respect of sovereignty, ideology and territorial integrity of all countries, were “inalienable particularities” that defined it as a nation. Panama would always advocate for international peace and security, the promotion of dialogue between Member States, the strengthening of multilateral dynamics and facilitating the mission of the United Nations. Such advocacy stemmed from the experiences accumulated during the course of Panama’s diplomatic trajectory. He said his country, upon regaining democracy at the beginning of the 1990s, and with the support of the United Nations Development Programme (UNDP), had strengthened administrative institutions, secured an impeccable revision of the Panama Canal to Panamanian hands, and identified strategies to accomplish the nation’s development priorities. Panama’s robust outlook for economic growth and favourable management of debt, combined with continuous, adequate and careful financial discipline, had been determining factors in the recently achieved investment grade from the World Economic Forum, which placed it as the second most competitive country in Latin America. In light of the need to contribute to the coherent restructuring of the world economy, he said Panama’s international agenda pointed towards active participation in important multilateral mechanisms and economic integration forums, to allow the openings of new markets in trade, investment, tourism and technology. To guarantee a favourable economic climate, internal conflicts must be avoided, including through effective democratic regimes, public security, the guarantee of human rights, responsibly-managed resources, access to health and sanitation services, and the affordability of basic goods, among others. The experience of living under dictatorship had led Panama to speak out in order to strengthen or re-establish the validity of democratic institutions where required, and express its position in defence of democracy, including in Honduras and during the failed coup attempt in Ecuador, and in connection with the “Arab Spring”. He said that Panama’s lengthy and notable trajectory of peace and conciliation had fostered the opinion that the best option when facing the threat of armed conflict was a broad, transparent and unconditional diplomatic dialogue between the parties. In that light, he welcomed the unanimous adoption of the resolution entitled “Strengthening the role of mediation in the peaceful settlement of disputes, conflict prevention and resolution”. That consensus marked a victory for reason over the absurd unreasonableness of confrontation. Human history had shown that hunger, misery, ignorance, injustice and social inequality engendered the greatest threats to peace and security. In order to save future generations from the scourge of war, the international community must opt to proactively ensure a peace that was based – not on reacting to political or military acts of aggression – but on trusting and guaranteeing universal and equal human rights in all corners of the globe. The world faced many great challenges, one of the greatest of which was the threat posed by climate change and its effects, he said. Addressing such threats was a priority of his foreign policy in the environmental realm, and, in that light, Panama would be hosting the meeting of the special working groups of the United Nations Framework Convention on Climate Change. Those groups were set to gather in Panama from 1 to 7 October to advance modalities for a second period of commitments of reductions in carbon emissions by developed countries and the stabilization of global temperatures.