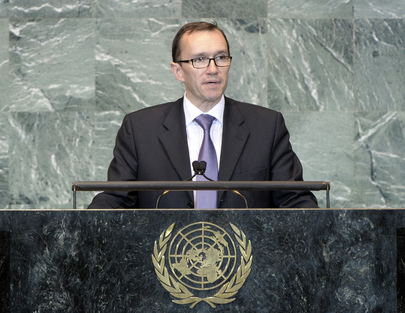 ESPEN BARTH EIDE, Deputy Minister for Foreign Affairs for Norway, describing major changes around the world, said autocrats who had failed to offer a better life in freedom and dignity had been overthrown. Calls for reform in Syria had been met with violence, South Sudan had become the United Nations newest Member State, and in Côte d’Ivoire and Libya, the United Nations had proved its worth by addressing some of the most challenging situations in the world. Norway’s participation in the military campaign in Libya was an expression of its belief in a United Nations-led world order and the principle of the responsibility to protect. Promoting human rights and gender equality was a common responsibility, and failing to adhere to universally agreed principles in that area was simply unacceptable. Investment in women and girls was essential for economic prosperity. He said that strong political leadership and new partnerships had brought about real progress, and Norway would continue to focus on women’s rights and promoting women’s role in development. There were vast untapped resources within many countries that were struggling to achieve the Millennium Development Goals and broadening the tax base, halting illegal capital flows and fighting corruption were measures that must be used fully in the fight against poverty. On climate change, he said the implementation of the Cancún agreements was crucial and that the Green Climate Fund must be made operational. Turning to the Middle East, he said Norway’s policy was based on the vision of two States, Israel and Palestine, living side by side in peace and security. It was legitimate for Palestinians to turn to the United Nations under current circumstances and he welcomed the call by the Quartet for negotiations on outstanding final status issues to be completed within a year. Norway looked forward to welcoming Palestine as a full United Nations member. Stressing the importance of strengthening the United Nations, he said the Organization had not been equipped with the resources to carry out its mandates. “We define noble objectives, only to undercut them in the budgeting process,” he said. Noting that Member States had a crucial role to play in achieving greater system-wide coherence, he said that at times, the vision of a United Nations that “delivered as one” had been undermined by State insistence on “pet” projects, earmarking of funds and “awkward” financial reporting requirements. In closing, he deeply regretted that the Assembly podium once again had been abused to promote extreme views and unfounded allegations. The purpose of the general debate was to draw attention to current challenges and lay the basis for constructive dialogue.