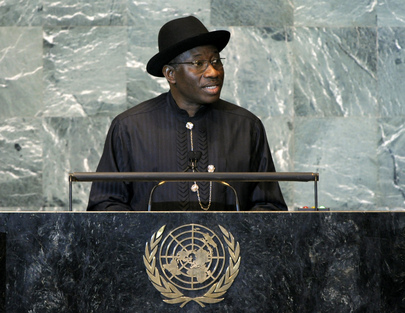 GOODLUCK EBELE JONATHAN, President of Nigeria, after welcoming South Sudan as the newest Member of the United Nations, said the world of the twenty-first century was becoming more precarious, unpredictable and dangerous than at any other time in history.  Terror was increasingly used as a form of political action and posed a serious threat to international peace and security.  Saying the war against terrorism must be won, he noted the recent upsurge in terrorist attacks in Nigeria over the last few months.  Noting that the United Nations building in Abuja was the target of an attack that left several people dead, he conveyed Nigeria’s condolences to the victims’ families, as well as to the entire United Nations family, for that barbaric and heinous attack.

He stressed that such acts only strengthened Nigeria’s resolve to develop appropriate national strategies and to collaborate more closely with the international community in fighting that menace.  In June, the Nigerian Government enacted a terrorism prevention bill and an anti-money-laundering amendment act.  It was also working with the United Nations Counter-Terrorism Implementation Task Force, the Counter Terrorism Executive Directorate and other relevant international bodies and friendly countries to sharpen its response mechanisms.  It would launch its first project with the Task Force in November, aimed at promoting conflict prevention and countering the appeal of terrorism to youth.

Boasting that Nigeria’s April general elections had been judged credible and transparent, he said the Government was on course to implement its strategic plan to ready the country for the future.  In that context, there was a new sense of activity and self-belief in the ability to create a new Nigeria, founded on the principles of personal freedoms, democracy, good governance and rule of law.

Underlining the importance of using preventive diplomacy in resolving armed conflicts around the world, he said the international community had focused too little attention on mediation and preventive diplomacy in favour of the military aspects of peace and security.  Cultivating peace and fulfilling the aims of Chapter VI of the United Nations Charter required early identification and appropriate intervention.  The goal should always be to present the peaceful alternative as a less costly and effective way of achieving political and social objectives.

Yet, to move from a culture of response to one of prevention, the international community must muster the political will to promote preventive diplomacy, particularly through mediation, he said.  Greater human and financial resources must be extended to existing institutions and mechanisms for conflict prevention and resolution, both within and outside the United Nations system.  He also proposed the establishment, under the Secretary-General’s Office, of a conflict mediation commission to collate information on conflict situations and to develop rules of engagement, including sanctions, which could apply to anyone preventing a conflict’s peaceful resolution.  He also stressed the need to tackle the problem of trafficking in small arms and light weapons, particularly through the actualization of an arms trade treaty.

Among other issues, he voiced support for the Secretary-General’s proposal to deploy an assessment mission to study the situation in the Gulf of Guinea, where increasing piracy and other maritime crimes were damaging security, trade and other economic activities, in order to explore possible options for United Nations support and action.  Nigeria also supported the newly created UN Women and strongly emphasized women’s political participation in its national action plan on gender equality and women’s empowerment.  It had recently ratified the Convention on the Rights of Persons with Disabilities and acceded to four other international human rights instruments, while domestically enacting national human rights legislation.  The international community must provide robust assistance to Côte d’Ivoire as it embarked on post-conflict reconstruction and reconciliation.  Nigeria looked forward to membership in a revamped Security Council.