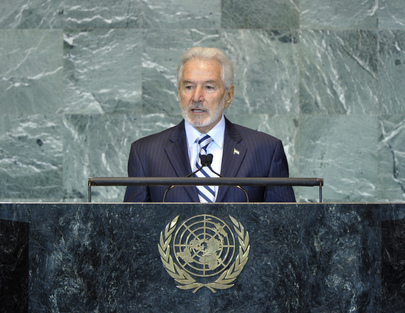 SAMUEL SANTOS LÓPEZ, Minister for Foreign Affairs of Nicaragua, said his Government rejected war as a means for solving conflicts between States. Indeed, what was happening in Libya right now was only the most recent attack against the sovereignty of a United Nations Member State. He decried the “shameful manipulation” of the relevant Security Council resolution and the “illegal nature” of the NATO operation in Libya. He also rejected the use of the “misnamed principle of the responsibility to protect in order to intervene in our countries, to bomb civilians and change free and sovereign Governments”. It was dialogue, not interference and intervention that would not resolve political crises.

Calling for a rejection of the unacceptable policies of the major Powers “aspiring to hegemony”, he wondered where those supposed defenders of oppressed peoples — “those self-proclaimed civilian protection apostles” — were when attempts were being made to recognize the inalienable rights of the Palestinian people. The double standard was clear — after 60 years of conflict, the Palestinians would be deprived of their right to an independent State, when, barely 10 days ago, “with unheard of haste”, the Assembly had recognized the National Transitional Council in Libya, even though that Council had not set up a Government. He called for the Assembly to proclaim Palestine the 194th Member of the United Nations, as such recognition was not only just, it would be a clear move to shore up peace and stability in the Middle East. He said both Palestine and Israel must exist and live in peace so that their peoples could work towards their own well-being and development.

He called for harmonized interaction between humankind and Mother Earth, saying the planet was under threat, and the potential dangers were multiplying. The “hair-raising” events that had surrounded the earthquake and tsunami that struck north-eastern coastal cities of Japan and ignited the possibility of a major nuclear disaster were only the most recent example. While the present and future repercussions of that “warless nuclear war” had not yet been determined, some scientists had estimated that the long-term damage might be more serious than the Chernobyl disaster. While expressing support for the Government and people of Japan, Nicaragua would vehemently call on all States with nuclear plants to take all measures to avoid accidents that might gravely endanger peoples’ health and the environment.

With that in mind, he said, the international community must not squander the opportunities that would be provided by the upcoming Durban Conference on climate change “to redirect humanity towards development that is harmonious with Mother Earth and respectful of the 7 billion human beings that presently inhabit the planet”. In Durban and in Rio, Member States would be called upon to renew their political will and to adopt concrete commitments based on previous progress and agreements. He noted that climate change had exacerbated the food crisis, and higher fuel prices had forced some countries with agricultural bases to produce biofuel, which had also impacted supply and demand for basic necessities.

He said Nicaragua was going through a period of change that aimed to reverse the negative effects of 16 long years of neo-liberal Governments. “We are rescuing values, reinstating rights, strengthening capacities “and constructing a new Christian, socialist and solidarity model, which is replacing the neo-liberal model of savage capitalism.” Nicaragua was also articulating popular democracy through its national human development plan. That plan sought to promote the country’s socio-economic health by increasing employment and reducing poverty and inequality. Nicaragua was moving forward despite its “historical and structural problems,” which remained a burden to be eliminated in the process of national development. Tackling poverty and underdevelopment required sound polices and a sustained effort in favour of political and Government systems that were deeply committed to the population’s aspirations.