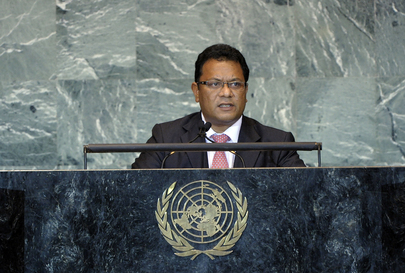 MARCUS STEPHEN, President of Nauru, said his country had made great strides in sustainable development and poverty alleviation since 2007, but would fall short of its ambitious goals until the international community chose to create an environment in which all countries had the opportunity to realize their development aspirations. Like most small Pacific island States, Nauru’s culture and economy were heavily dependent on a healthy and productive marine environment for its food security and Government revenues, he pointed out.

Calling for the “Rio+20” United Nations Conference on Sustainable Development to recognize the importance of the “blue economy” in that context, he said it was important to enable small island developing States to enjoy a greater share of the economic benefits of their marine and coastal resources. Destructive fishing practices must be reduced and eventually eliminated, fisheries must become sustainable and the resilience of coral reef ecosystems must be built up to withstand the impacts of climate change and ocean acidification, he stressed.

Meanwhile, Nauru had taken action, he said, noting that his island nation’s application to join the International Seabed Authority, which would enable it to engage in innovative ways to generate economic growth, had been granted. Proceeds from the development of copper, nickel and manganese resources, which would be extracted in accordance with the highest environmental standards, would go towards funds supporting education and training, as well as health and the environment. However, targeted international assistance to address the unique vulnerabilities of small island developing States was still urgently needed, he emphasized, calling for the creation of a formal small island category with dedicated support mechanisms.

Unfortunately, all such efforts would be for nought unless if immediate action was not taken to address climate change, he said. For that reason, the upcoming Conference of Parties in Durban must make significant progress towards a comprehensive, legally-binding document that could ensure the survival of all nations. In addition to a new post-Kyoto commitment regime, the Cancun Agreements must be put into practice, with more ambitious mitigation commitments and actions, he said, urging the launch of the Green Climate Fund and he conclusion of a binding agreement based on the results of the Ad Hoc Working Group on Long-term Cooperative Action.

Noting that his country would chair the Alliance of Small Island States in 2012, he said he had no illusions about the enormity of the challenges ahead, particularly considering that countries were turning inward. “We must resist the urge to engage in zero-sum politics and recommit to principles of multilateralism,” he urged. Durban would be the next opportunity to “embark on a more sustainable path and create a world we are proud to leave for future generations,” he said. “We should not let this opportunity slip away.”