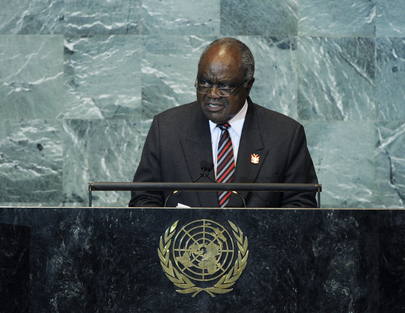 HIFIKEPUNYE POHAMBA, President of Namibia, underscoring the debate’s theme on mediation in the settlement of disputes by peaceful means, stressed that the international community should uphold that principle in conflicts around the world. While recognizing the legitimacy of the peaceful demands of democratic changes in sister countries, such as Tunisia and Egypt, Namibia believed that the demands for democratic change should be locally driven and should not be used as a pretext to undermine the principles of sovereignty and non-intervention in the internal affairs of independent States. “We are concerned that all efforts by the African Union to find a peaceful negotiated solution in Libya were ignored and undermined,” he said, adding that never before in the history of the United Nations had the sanctity of non-intervention been so compromised as it had in Libya. Indeed, the Libya intervention reminded Africa of the Berlin Conference of 1884-1885, when the continent was carved up by the colonial Powers.

He underscored the importance of promoting genuine national reconciliation and unity in the aftermath of recent political changes in some African countries. In addition, the challenges of poverty and unemployment, especially among youth, must urgently be addressed, he said. South Sudan’s successful independence demonstrated the statesmanship and wisdom of the leaders of Sudan and South Sudan, and Namibia called on both countries to resolve all outstanding issues through peaceful means. His Government also called for the immediate implementation of the United Nations Settlement Plan and relevant resolutions calling for a free and fair referendum in Western Sahara. Reaffirming full and unequivocal support for the legitimate struggle of the Palestinian people to achieve their inalienable right to self-determination and national independence, he voiced support for Palestine’s admission as a full United Nations Member State. He also called for the immediate and unconditional lifting of the embargo against Cuba.

Namibia welcomed the recent signing, with the facilitation of the Southern African Development Community (SADC) Mediator, of the Road Map by the Malagasy political stakeholders, he said. That signing paved the way to return that country to constitutional order and democratic rule. Now, the United Nations and the international community should provide adequate financial support to Madagascar and actively engage in mediation efforts to ensure the Road Map’s full implementation.

Among other issues, he called attention to the severe drought and famine and subsequent humanitarian catastrophe in Somalia, noting that Namibia had contributed food supplies as part of the international effort to aid the Somali people. He further stressed that all Member States should work towards the successful completion of the seventeenth session of the United Nations Framework Convention on Climate Change to be held in Durban later this year. It would, he said, set the tone for next year’s United Nations Conference on Sustainable Development (“Rio+20”). Finally, he underscored Namibia’s firm conviction that a reformed Security Council should be democratic, representative and transparent in its working methods.