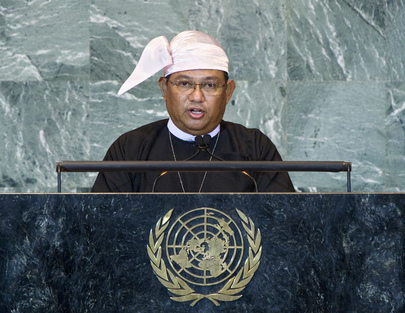 WUNNA MAUNG LWIN, Union Minister for Foreign Affairs of Myanmar, updated the Assembly on recent changes taking place in his country, saying it had emerged as a “new democratic nation”, in accordance with the Constitution, which had been approved by an overwhelming majority of people. Giving context, he said multiparty democratic general elections had been held in November 2010, in which 37 political parties contested. Today, elected representatives were exercising their democratic rights in legislative bodies. In his inaugural speech in March, the President had said that all elected Hluttaw members were duty-bound to safeguard the Constitution. The new Government had pledged that all citizens would enjoy equal rights, and that it would both revoke existing laws and adopt new ones deemed necessary to realizing peoples’ fundamental rights.

Noting that Myanmar had received State leaders from neighbouring countries in the last five months, he said the new Government had also launched reforms to improve socio-economic conditions for its people, including those to reduce poverty. Forward-looking economic policies would lead to inclusive and equitable growth which, in turn, would increase job opportunities and promote agriculture. In that context, he urged that unilateral sanctions on Myanmar be lifted. In the area of human rights, he said the United Nations Special Rapporteur on the Situation of Human Rights in Myanmar had visited in August, and that Myanmar’s report had been submitted to the Human Rights Council Universal Periodic Review. Myanmar agreed to accept 52.4 per cent of the recommendations and believed the review process was the most dependable monitoring mechanism to rectify countries’ human rights situations.

Turning to other matters, he said the Government offered an olive branch to all “national race” armed groups on 18 August, which had been accepted by some. In May, the President had granted amnesty to 20,000 inmates, who were released in July. Further, he had received Daw Aung San Suu Kyi on 19 August and held “cordial and candid” discussions to find common grounds for cooperation. Turning to other issues, he said as an agro-based country, Myanmar followed climate change issues with interest. Lately, floods and droughts had devastated agricultural production in the region and Myanmar looked forward to tangible outcomes from the Seventeenth Conference of Parties to the United Nations Framework Convention on Climate Change. The three pillars of sustainable development — economic development, social development and environmental protection — also must be promoted in an integrated manner.

Strongly condemning terrorism, he welcomed the Secretary-General’s commitment to conduct a global threat review in the wake of deadly attacks in Abuja, Nigeria. Myanmar stood ready to cooperate regionally and internationally to combat that scourge. Efforts to attain the Millennium Development Goals had been hindered by slow economic growth, diminishing resources and increasing food prices, and while each country had the primary duty for achieving its own development, international support was needed. Turning to security issues, he said that as a signatory to the Nuclear Non-Proliferation Treaty, Myanmar was a strong advocate of nuclear disarmament and had tabled a resolution on that matter every year since 1995, which enjoyed wide support. His Government strongly supported any effort to realize a world free from such weapons and its by-products. He closed by stressing that Myanmar had transformed “towards” a democratic nation in a smooth and peaceful manner. The steps taken were concrete and irreversible, and the Government would ensure that reforms were carried out in an incremental and dynamic manner.