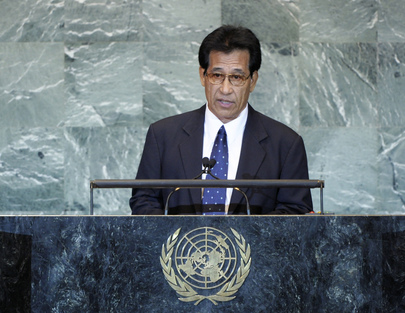 EMANUEL MORI, President of the Federated States of Micronesia, said the Security Council’s “giant step” in adopting a presidential statement during its July debate on the security implications of climate change had been encouraging. As a Pacific small island developing State, the Federated States of Micronesia faced a threat to its existence from the adverse impacts of climate change, but those who had opposed the Council debate, as well as those who doubted the security implications of climate change ignored the obvious, he said. It was imperative to begin immediately reducing greenhouse gas emissions to protect vulnerable regions, he emphasized.

He went on to point out that an estimated 60 Second World War-era shipwrecks filled with a “ticking environmental time bomb” of 32 million litres of oil also threatened his island nation. Some of the oil had already started leaking, and a collapse of the corroding wrecks could create a spill comparable to the 2010 Gulf of Mexico oil spill disaster. “In this respect, to avoid a major environmental disaster, I am now appealing to the international community for immediate support,” he said.

For the Rio+20 Conference, the Federated States of Micronesia and other Pacific small island developing States had called for recognition of the “blue economy”, he said. Ocean resources had enormous value, but their custodians had not received an equal share of that bounty. Selfish illegal, unregulated and unreported fishing would, if unabated, continue to deprive the country’s people and fishing industries of millions of dollars in annual revenues. The conservation and sustainable management of oceanic resources would be needed in the days ahead, so the Government had committed to various conservation activities, including support for the establishment of shark sanctuaries.

There was also a need for new measures to address the unique vulnerabilities of small-island States, he continued, emphasizing the importance of building upon the momentum of Rio+20 to convene a third global conference that would develop results-oriented measures. A special category for small islands developing States was still imperative in improving the lot of their disadvantaged peoples, he said, adding that non-communicable diseases were also a major concern. If allowed to continue unabated, they could potentially devastate economic development by undermining labour supply, productivity, investment and education, he warned.

On the Israeli-Palestinian question, he urged the international community to uphold the principles of peaceful co-existence enshrined in the United Nations Charter. “We continue to support Israel’s right to live within secure and recognized borders, free from fear of terrorism,” he said. “We also acknowledge Palestine’s right to statehood, which can only be achieved through negotiated settlement between the two parties. And I agree with President Obama that there are no shortcuts to solving the problem.”