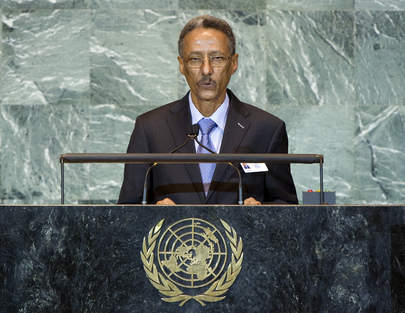 HAMADY OULD HAMADY, Minister for Foreign Affairs of Mauritania, said the sixty-sixth session of the Assembly took place during a very special political environment of revolutions for democracy.  Mauritania had been at the forefront of the movement — over the past years it had seen peaceful change to democratic, credible institutions that guaranteed individual freedoms within the rule of law.  Those measures included free and fair transparent elections with the presence of international observers.  His country had also experienced an opening of dialogue between all political persuasions, as well as the opening of airwaves, which would begin radio and television broadcasts in short order.

Since the election of Mohamed Ould Abdel Aziz as President, Mauritania had joined regional groups and broadened the scope of its diplomacy.  The country also wished to contribute to reform of the Organization and its different bodies, including the Security Council, asking for permanent representation for Africa, as well as the Arab Group.  The Security Council must fairly reflect the will of the entire international community, he said.  Mauritania was also candidate for a non-permanent Security Council seat for 2012-2013, as a demonstration of its sincere will to promote peace and security.  Mauritania was not party to any conflict and had excellent relations with all countries in the world, and thanked all friendly States that supported its candidature.

The increase of absolute poverty, especially in the most destitute parts of society, made it difficult for developing countries to reach the Millennium Development Goals as their deadline approached.  Conditions, such as decreases in overseas development assistance, volatility of commodity prices and increases in death rates of newborns and mothers, had devastating consequences on the populations of developing countries.  There needed to be acceptable levels of public service to assure international peace and security, he said.  Non-communicable diseases were another obstacle to the Goals, and he noted that this country had risen to the challenge, creating health infrastructure and strengthening human resources in record time, over the period of two years since the succession to power of President Aziz.

The Israeli-Arab conflict was also a source of insecurity, and his country supported recovery of all the rights of the Palestinian people, calling on recognition of Palestine as an independent State along the borders of June 1967 with full membership to the Organization.  Mauritania also condemned Israel’s blockade on the Gaza Strip and acts by Israel’s military.  The international community needed to support the Libyan people in all their needs so their transitional phase would be successful, and was also required to deliver a speedy response to the tragic humanitarian situation caused by the acute drought in the Horn of Africa.  Mauritania had provided $1 million assistance to Somalia, even though its means were modest.

Organized crime, such as kidnapping, terrorism and drug, weapon and human trafficking, had been expanding for many years in the Sahara region.  That was a threat to peace and stability in the region, and Mauritania’s security operations had responded firmly to threats of terrorist groups, succeeding in guaranteeing peace within and along its borders.  In cooperation with neighbouring countries, it had put a stop to the activities of those terrorist groups and made it impossible for them to move freely.