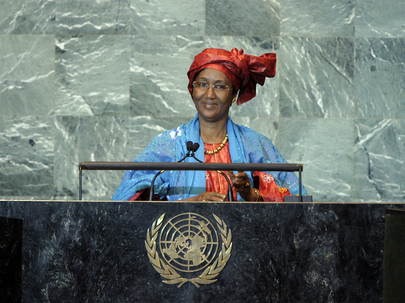 CISSÉ MARIAM KAÏDAMA SIDIBÉ, Prime Minister of Mali, said that while Africa had made remarkable progress in promoting peace and security, the situations in the Horn and North Africa remained troubling. She called for an end to the use of force in Libya and for the start of negotiations to end the crisis. On the Middle East, she said the Israeli-Palestinian stalemate had galvanized the international community, and urged the parties to take the necessary measures to end the deadlock in a fair and comprehensive manner.

Turning to the security challenges in the Sahel subregion, she said that her country and its neighbours were deeply concerned by a raft of illegal activities, including small arms trafficking and other forms of organized crime carried out in collusion with terrorist groups. The Governments concerned had established joint mechanisms to combat activities that could destabilize the region. Parallel to those efforts, the Government of Mali was working assiduously to enhance socio-economic prospects in the north, she said.

She said 2012 would be an important year in Mali, as it would launch an open process towards a constitutional referendum and near-term elections. The current Government was committed to upholding reforms under way and holding open elections next year. The country’s democracy had matured over the past four years, largely because Mali had begun to draw on its peaceful traditions and open, dialogue-based culture, she said. She called on the international community to support the election process and to assist Mali is it prepared for the constitutional referendum.

On other matters, she said that due to its geographical location, Mali suffered from desertification, land degradation and the vagaries of rainfall. It therefore considered climate change to be one of the international community’s major challenges. As such, she reaffirmed her Government’s commitment to implementing all international measures aimed at preserving natural resources, protecting biodiversity and restoring natural habitats.

Mali was also committed to combating HIV/AIDS, and other infectious as well as non-communicable diseases, she said, noting that the latter were quickly becoming obstacles to development. The international community must also maintain its focus on improving the situation of women and girls worldwide. It must work harder to meet agreed ODA commitments, as well as obligations in the area of development financing and debt reduction or elimination. In the quest for a fairer and more peaceful world, strengthening solidarity and cooperation was the best way to find solutions to the common challenges faced by all, she said.