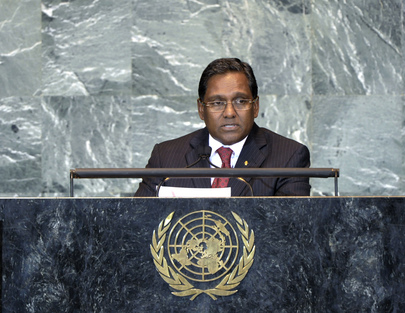 MOHAMED WAHEED, Vice-President of Maldives, said that the world was witnessing the greatest liberation movement since the fall of the Berlin Wall. What was most striking, he said, was that it was happening in predominantly Muslim countries, demonstrating that the demand for human rights and democracy was universal. The argument that Islam and democracy could not be united was shown to be a “foolish and patronizing fallacy”. In the Maldives, a similar revolution had started eight years ago. Then, in 2008, elections brought to a close a 30-year authoritarian regime. Since then, the country had experienced difficulties in consolidating democracy; it had nonetheless become a safe, stable and successful nation. “Democracy is a process, not an end goal,” he said. A successful democracy also needed a free media, strong institutions and a vibrant civil society. Above all, “we need patience to realize the fruits that democracy brings.”

It was necessary to counter the false perception that people must make a choice between devotion to Islam and the full enjoyment of human rights, he continued. For that reason, the Maldives intended to organize, in 2012, a major international conference on progressive Islamic jurisprudence and human rights. There it hoped to renew the concepts of peace and tolerance, coexistence and interfaith harmony that existed in Islam.

The Maldives stood “shoulder to shoulder” with the Palestinian people. It believed that the time for them to join the international family of nations was long overdue, and welcomed its application for statehood; the Maldives also valued and supported the right of the people of Israel to live in peace and security. For its part, the Maldives planned to contribute to international peace and security by becoming engaged — for the first time — in United Nations peacekeeping efforts around the world.

Standing just 1.5 metres above sea level, the Maldives was faced with the “clear and present danger” of climate change. It was likewise becoming evident that the international community needed to be better prepared and equipped to address the challenges of disaster preparedness and response. Cutting global carbon dioxide emissions to a safer level below 350 parts per million was not just an environmental issue, he stressed, but also an issue of national security and a chance to create new jobs and grow the economy. The Maldives was, therefore, proud to announce that it would dedicate a minimum of 2 per cent of its Government revenue to renewable energy investments, he said.

Like the Rio Declaration, the objectives defined in the Barbados Programme of Action and the Mauritius Strategy had gone largely unmet, he continued. Now, as “Rio+20” approached, it was critical to include in its agenda a serious review of progress made by the international community to address the sustainable development challenges facing small island developing States, in particular. He hoped that the Conference would provide a platform and create the necessary impetus to conduct a radical reform of international support of island States. Moreover, discussions at “Rio+20” should be based on three pillars: reform of United Nations support for sustainable development of small island developing States; a political declaration and strategy to give impetus to the roll-out and mobilization of renewable energy and green technologies; and, finally, improvements in the integration of sustainable development principles into international and domestic policy at both strategic and project levels.