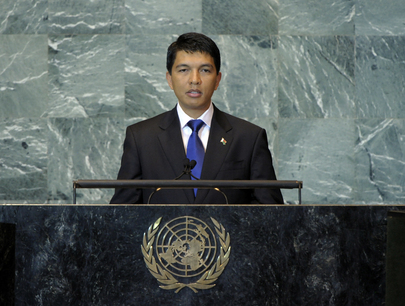 ANDRY NIRINA RAJOELINA, President of the High Transitional Authority of Madagascar, said that after three years of political crisis, his country was proud to resume its place among the wider community of nations. He said the multiple world crises, including those in North Africa, bore witness to the importance of the general debate’s theme — mediation and preventive diplomacy. Indeed, diplomacy had been essential in helping Madagascar work towards resolving its internal disputes, he said, paying tribute to the pioneering efforts of the late Secretary-General Dag Hammarskjold in the area of dialogue and mediation.

He said conflict could be sparked in a number of ways, including through popular uprisings when Governments failed to respect the aspirations of their people. In such cases, mediation was essential in finding lasting solutions. However, such solutions and the dialogue leading to them must be inclusive and relevant to the realities in which the citizens lived, he said. In Madagascar’s case, the Malagasy people had risen up in 2008 to force a break with an oppressive Government that had abused human rights and obstructed socio-economic progress for decades. The people had demanded a better life even while respecting international principles.

Commendable mediation efforts had been implemented with the help of civil society partners, the international community and the Southern African Development Community, among others, he said, “at just the moment when consensus seemed like it could not be reached”. The involvement of all those actors had been critical to mounting an effective and comprehensive response, he said, adding that the response had indeed been commensurate with the crisis. The people had been patient, even as they had suffered for three long years. The post-crisis road map outlined by SADC represented the concerns of a broad range of stakeholders in Madagascar, and the country was prepared to move forward with it for the benefit of all the people, he said.

Yet, while an extremely important step had been taken, “there is a long way to go”, he said. It was therefore necessary to implement the road map fully, in line with the people’s expectations. The ultimate and most pressing goal was holding free and fair elections, which was the only way truly to resolve the crisis. Madagascar was determined to move forward, he said, adding that he would spare no effort in ensuring that the country achieved the expected results. In that regard, he appealed to the international community to support the objectives of Madagascar’s electoral needs assessment, so that preparations could be laid for free, fair and broadly representative elections as soon as possible.