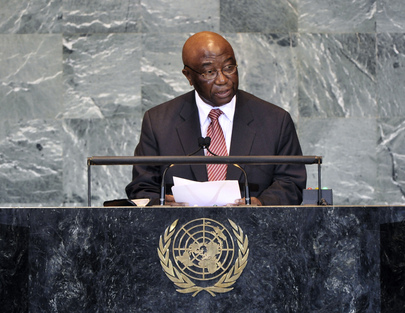 JOSEPH N. BOAKAI, Vice-President of Liberia, welcoming South Sudan’s admission as the 193rd United Nations Member, said the theme of this year’s debate — mediation — was an opportune choice, since the world continued to be polarized by conflicts that were rooted in political marginalization and socio-economic inequity.  Despite global interdependence, inter-State relations had been constrained by divergent ideological beliefs and structural inequalities, undermining efforts to move as one global community.  The United Nations had a central role in promoting mediation in the pursuit of peace, and the Secretary-General’s good offices were critical to such efforts.

As a post-conflict country, Liberia had benefited from mediation efforts, but more emphasis must be placed on preventive measures, he said.  Mediation should be employed as soon as early warning signs of conflict emerged.  Noting that it had been nearly a decade since the United Nations intervened in Liberia, ending a disastrous 14‑year civil war, he said the Government had devised programmes and policies aimed at lifting Liberians to higher levels of productivity, reviving basic services, restoring infrastructure and re-establishing the rule of law.  “Overall, we are making progress on all these fronts,” he said.  In such work, women’s empowerment and participation had been prioritized.  The Government was also committed to developing programmes to empower youth leadership.

On security sector reform, he noted a focus on building the capacity of the national police, but also expressed deep concern at events in the Mano River Union Basin.  The Peacebuilding Commission and Peacebuilding Support Office had worked with the Government and others in devising the Liberia Priority Plan, which focused on security sector reform, strengthening the rule of law and speeding national reconciliation.  Acknowledging the significant role played by the Economic Community of West African States (ECOWAS) in maintaining peace and security in the subregion, he said Liberia was poised to hold a democratic election on 11 October 2011, which would test the country’s commitment to democratic governance and peaceful coexistence.  Every action was being taken to ensure the election was free, fair, transparent and credible.

He went on to say that negative economic forces hampered global growth, which had repercussions for African countries, where the crippling effects of external debt, deteriorating terms of trade and declining investment and capital flows were debilitating.  He hoped the Istanbul Action Programme would bring real change for the least developed countries.  Urging collective action to roll back the adverse impacts of rising food prices, he cited Liberia’s “Ending Hunger in Liberia” programme, which aimed to strengthen the agricultural chain.  The “unresolved riddle” in Somalia also presented a challenge to the United Nations, a situation that required urgent action.  On the Middle East, he said dialogue between the parties was the most viable option for ending the stalemate for an independent Palestine, and he called on Israel and Palestine to show a commitment to engaging with each other in dialogue that would achieve the desired two-State solution.  Welcoming the new leadership in Libya, he encouraged the National Transitional Council to restore that country to normalcy.