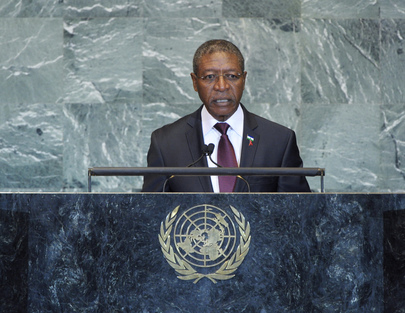 PAKALITHA B. MOSISILI, Prime Minister of Lesotho, said that while the target date for attaining the Millennium Development Goals was fast approaching, the world continued to be overwhelmed by unending hurdles in its path toward those objectives.  Despite globalization, the least developed countries were yet to be fully integrated into global markets.  Rapid environmental degradation, compounded by the effects of climate change, continued to adversely affect their ecosystems, agriculture, water resources and water supplies.  At the same time, HIV/AIDS had not relented from decimating whole nations, and good governance and the abuse of power in international relations, among other things, also presented challenges.  Terrorism also continued to pose transnational challenges, and Lesotho was convinced that the only way to ensure that terrorists did not acquire weapons of mass destruction was the total elimination of nuclear weapons.  Thus, he urged the nuclear weapon Sates to be faithful to their commitments under the Treaty on the Non-Proliferation of Nuclear Weapons (NPT).

Continuing, he said the international community had been inconsistent in its approach to managing internal and external conflicts of significant proportions.  Acting through the Security Council, it had been swift and decisive in intervening militarily in some countries, while opting for mediation in others.  In still others it had turned a blind eye at best, leaving it to some Members to unilaterally threaten sanctions.  The Organization had not sufficiently used mediation as a tool for conflict resolution and believed the Security Council must adopt a multilateral approach, since it was the only way to guarantee transparency, impartiality and ownership of the process by the Organization’s general membership.  Moreover, peace that was imposed without consulting all parties could not be sustained.

While the primary role for maintaining international peace and security lay with the Security Council, cooperation and coordination between the Council and regional organizations in terms of Chapter VIII of the Charter was key to speedily resolving conflicts and the United Nations must empower and support the efforts of regional structures and organizations.  Further, the Council would be able to better discharge its function if it was more representative of the larger membership, and Lesotho called for the Council’s early and comprehensive reform.

He noted that the 2007 crisis in Kenya had been resolved peacefully through mediation by the Southern African Development Community (SADC).  A mediated solution was also achieved in Burundi and Sudan. Lives had been saved at minimal cost.  Strangely, however, the Council sometimes preferred military intervention and individual Member Sates had also unilaterally engaged in military intervention, although neither case ever enjoyed universal support from the United Nations membership.  Libya could be a case study for such a situation, he said, observing that although the African Union had developed a comprehensive road map that would have lead to a peaceful settlement of the crisis, it had been marginalized.  Instead, the results of the hastily adopted military intervention were a matter of record for all to see.  Nevertheless, the African Union’s Road Map for Peace remained relevant and the United Nations and the Union must work together to consolidate peace and national reconciliation and to establish an all-inclusive Government in Libya.

Turning to other matters, he stressed that the good office of the Secretary-General should be strengthened through sufficient human and other resources in order to better undertake early mediation for conflict prevention.  He also encouraged that office’s mediation efforts towards realizing a free and independent Western Sahara.  In addition, he urged all parties involved in the Palestine question to resuscitate negotiations between the State of Palestine and Israel.  Mediated solutions should also be explored between Cuba and the United States.