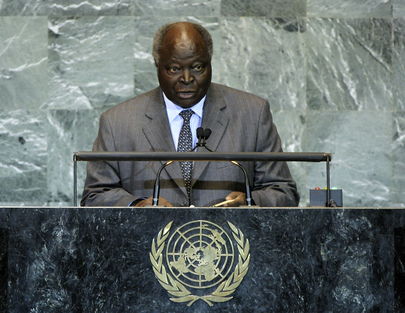 MWAI KIBAKI, President of Kenya, said this session of the General Assembly offered opportunities to promote mediation as a tool for conflict management and peaceful settlement of disputes. The role of regional organizations — the African Union, the East African Community and the Intergovernmental Authority on Development (IGAD) — was increasingly important, including in the continued search for global peace and security. IGAD was at the forefront to peace efforts for Somalia and Sudan, and he was pleased Kenya’s role in both situations remained crucial. He welcomed South Sudan to the community of nations, saying that that success story exemplified the potential of regional organizations “to resolve complex and deep rooted conflicts”.

The recent improvement in the security situation in Mogadishu, Somalia gave a lot of optimism, he said, urging the Organization and international community to seize the moment to support IGAD and the Transitional Federal Government in efforts to restore lasting peace and stability there. As a first step, the international community must enhance the mandate of the African Union Mission in Somalia (AMISOM), providing it the necessary resources to extend its coverage and control. “In addition, we must support the [Transitional Federal Government] in the implementation of the Kampala Accord that spells out a range of political processes necessary for the attainment of sustainable peace and development in Somalia,” he said.

He said the complex challenge of climate change continued to manifest itself in the Horn of Africa; as the Assembly was aware, the region was currently experiencing the worst drought in 60 years, resulting in a severe crisis affecting more than 12 million people. Increased environmental stress, loss of livelihoods and intense competition for scarce resources, had sometimes led to armed conflict among neighbouring communities. “This reality calls on us to enhance the regional capacity for early warning systems and adequate response arrangements,” he said.

The scale of climate change called for sustained action, and Kenya hoped the “COP 17” meeting in Durban would deliver African expectations for adaptation measures. Kenya believed international organizations working on the environment should be streamlined and given sufficient support. In that, the transformation of the United Nations Environmental Programme into a specialized agency was critically important. On the issue of Palestine, he called for realization of the two-State solution, in which Palestine’s 1967 borders were upheld, while the peace and security of Israel was guaranteed. He added his hope that Palestine be welcomed into the community of nations “with full membership in the United Nations”.