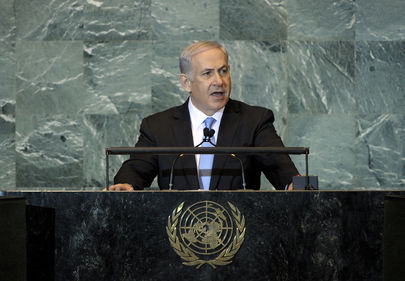 He recalled that here, in the General Assembly, Israel’s desire for a homeland had been branded racism, while it was unjustly singled out for condemnation more often than all the other nations of the world combined. That was, he suggested, not only “an unfortunate part of the United Nations”, but “the theatre of the absurd,” which not only cast Israel as the villain, but cast real villains as heroes. Indeed, Lebanon, heavily influenced by Hizbullah, currently held the Security Council’s presidency, meaning, in effect, that a terrorist organization presided over the body tasked with guaranteeing the world’s security. “You can’t make this up,” he said, adding that it was a place where automatic majorities could decide anything, including that the sun rose in the West or, as had actually been decided, that the Western Wall, Judaism’s holiest place, was occupied Palestinian territory.

But, even in the General Assembly, the truth could sometimes break through, he said. Indeed, he was advised upon his appointment in 1984 as Israel’s ambassador to the United Nations that, while he would be serving in “a house of many lies”, he must remember that even in the darkest place, the light of a single candle could be seen far and wide. “Today, I hope that the light of truth will shine if only for a few minutes in a hall that for too long has been a place of darkness for my country,” he said, noting that he came not to win applause, but to speak the truth that Israel wanted peace. While he, too, wanted peace, it was clear that it must be anchored in security and could not be achieved through United Nations resolutions, but only through direct negotiations. Yet, the Palestinians had so far refused. Indeed, while Israel wanted peace, the Palestinians wanted a State without peace and, “you shouldn’t let that happen,” he said.

Remarkably, hundreds of millions had been lifted out of poverty since the end of the Cold War, with countless more poised to follow. But, while that historic shift had been peaceful, a malignancy threatening the peace of all was now growing between East and West: militant Islam. Though cloaked in the mantle of a great faith, it killed Jews, Christians and Muslims alike, and on 11 September 2001, left the World Trade Towers in smouldering ruins. As he had visited the 9/11 memorial last night, he recalled the outrageous words of Iran’s President on the General Assembly podium yesterday, which implied that 9/11 was an American conspiracy. He stressed that, “while some left the hall, all should have.” Indeed, militant Islam had, since 9/11, slaughtered countless innocents from Madrid to Mumbai, and in every part of Israel. Today, the greatest danger facing the world was that the fanaticism would arm itself with nuclear weapons, precisely as Iran was trying to do. Inviting the assembled delegations to imagine what the “man who ranted here yesterday” would be like with nuclear weapons in his hands, he stressed that, if that happened, the “Arab Spring could soon become an Iranian winter.”

No one benefited more than Israel if those committed to peace prevailed, he continued. But, as Israel’s Prime Minister, he could not risk the future of the Jewish State on wishful thinking. In fact, no responsible leader could wish away present dangers, and the world around Israel was becoming increasingly dangerous. Militant Islam had taken over Lebanon and Gaza, while also poisoning many Arab minds against the United States and the West. It opposed not just the policies of Israel, but the fact of Israel as a State. Some argued that to slow down the spread of militant Islam, Israel should hurry to make territorial compromises that would allow for peace to advance and moderate Muslims to be strengthened. But, the problem with that theory was that it had been tried and it had not worked. In 2000, Israel made a peace offer that met nearly every Palestinian demand, but Arafat rejected it and the Palestinians launched a wave of violence. In addition to other offers since then, Israel had left territory in Lebanon in 2000 and Gaza in 2005. Neither action calmed the militant Islamic storm threatening Israel, but, in fact, only brought it closer and made it stronger. Moreover, peace had not come and Israel had only gotten war — and Iran, whose proxy in Gaza kicked the Palestinian Authority out.

He stressed that, while the Palestinians were armed with dreams, they were also armed with thousands of missiles and rockets, and now had a river of lethal weapons flowing into Gaza. Israel was prepared to have a Palestinian State in the West Bank, but not another Gaza. That was why real security arrangements were needed. But, instead, Israel was asked to make concessions with no regard for its security, he said, stressing that “in the face of the labels and the libels, Israel must heed better advice.” Indeed, it was better to have bad press than a good eulogy. But, better still would be a fair press whose sense of history extended beyond breakfast.

In serious peace negotiations, Israel’s security needs and concerns could be addressed, he said, and they would certainly never be addressed without such negotiation. At the same time, questions about Israel’s airspace and the smuggling of weapons into the West Bank were not theoretical, but entailed real problems and were, for all Israelis, matters of life and death. Thus, those potential cracks had to be sealed in a peace deal before a Palestinian State existed, not after. Otherwise, they would explode. In that context, he argued that the Palestinians must first make peace, then get their State. Once a peace deal was signed, Israel would be the first to welcome a Palestinian State, he said.

Noting that he had laid out his vision for peace in which a demilitarized Palestinian State recognized the Jewish State, he said the core of the conflict was not the problem of the settlements — which were actually a result of the conflict — but the Palestinians’ refusal to recognize a Jewish State within any border. Thus, it was time for them to acknowledge what every world leader had: Israel is the Jewish State. Indeed, when they did so, it would be clear that the Palestinians were at last ready to compromise. Asking President Abbas to join him in negotiations, he underlined the need to stop “negotiating about the negotiations” and negotiate peace. After offering to go to Ramallah, he suggested meeting here today at the United Nations. “Let’s talk doogri,” he said, pointing out that this meant “straightforward”. “I’ll tell you my needs and concerns. You’ll tell me yours. And with God’s help, we’ll find peace.”