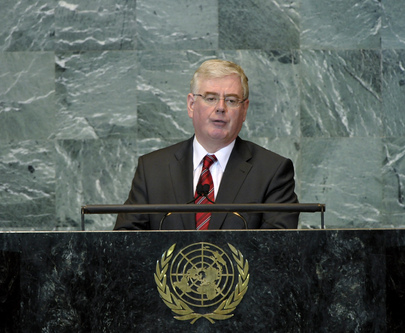 EAMON GILMORE, Deputy Prime Minister and Minister for Foreign Affairs and Trade of Ireland, said “We are living in times of breathtaking change”, much of it good — with scientific and technological progress making real advances — and much of it disturbing, with continued violent conflict and a range of threats to global peace and security. The United Nations was the constant anchor, as no other organization was as well equipped to develop common answers to the big questions of our time. With an increasing need for global solutions, the United Nations had the political, moral and legal authority to act and Ireland was deeply committed to the Organization. Freedom and equality were values that underpinned Ireland’s response to key global and regional challenges. Indeed, those values were not just words on a page, he said. In the last year, they had been expressed in North Africa and the Middle East in a million acts of courage and the liberation of people who had stood up to oppression. The people of the Arab Spring had asserted their basic rights and freedoms: to choose their own leaders, live freely and openly, and provide a decent life for themselves and their families. “They should inspire us in the work we do here,” he said. In that context, he pledged full support to the National Transitional Council as it sought to rebuild Libya and fulfil the democratic aspirations of Libyans. As for Syria, he said President Bashar al-Assad’s Government appeared “oblivious” to the demands of Syrians for change. “No leader who refuses to listen to what his people are saying and to act on their clearly expressed desire for peace and reform can expect to remain in power,” he said. In the Middle East, he said, that unless the deadlock in the Arab-Israeli conflict was broken, opportunities for another generation would be destroyed. The situation was urgent. It was more pressing than ever to get negotiations under way that would address all the core issues and culminate in a two-State solution. Ireland had long advocated the establishment of a sovereign, independent Palestinian State within the 1967 borders and strongly opposed actions that hindered or delayed negotiations, such as attacks on civilians or Israel’s illegal settlement of occupied Palestinian territory. Palestine had the same right to United Nations membership as any other Member State. If the borders of Palestine were still a matter for negotiation, then so, by definition, were those of Israel, which was rightly a full M ember State. But United Nations membership would not change the unstable situation on the ground, he said. The General Assembly would likely be asked to vote on a proposal to admit Palestine as a Member State, or perhaps, as a non-Member observer State, and he expected Ireland to give full support. “In Ireland, we know from our own experience that peace does not come easily,” he said. It required compromise. Israel must halt all settlement expansion and end the blockade of Gaza. On other issues, he said hunger remained the world’s greatest enemy, as 12 million people were struggling to find food in the Horn of Africa. Ireland was providing more than $67 million to that area in 2011 and 2012 for humanitarian assistance and measures to enhance food security. Acting together, with a strong focus on building the productivity of smallholder farmers in sub-Saharan Africa, was also important. Ireland would also maintain its engagement across all critical areas of the United Nations work, especially peacekeeping, human rights and disarmament.