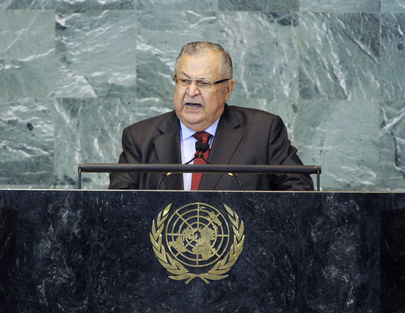 JALAL TALABANI, President of Iraq, said the country had come a long way in building a political system that was based on the National Collaboration Government. Iraq had started to restore its elements of strength that were lost due to more than three decades of internal and external wars conduced by the former dictatorship; the international isolation and sanctions that Iraq experienced; as well as the collapse of security institutions and the outbreak of sectarian strife that threatened its national existence after the collapse of the former regime.

In the area of development, having greatly improved its security, the country was still relying on the five-year plan for the years 2010-2014 that was announced by the Government in April 2010, and the licensing rounds that were held between Iraq and major companies in the field of oil and natural gas investments to improve the country’s oil industry, he said. Those actions were taken with a view to keeping the wheels of development turning and, thus, push the economy to advanced levels. Additionally, the country was able to rid itself of the sanctions and restrictions imposed on it as a result of the invasion of Kuwait. Based on the relevant Security Council resolutions, Iraq had been freed completely from all the restrictions imposed on it which had prevented it from benefiting from scientific and technological advances. Iraq had also gained its sovereignty in regard to its financial resources, he stated.

Continuing, he said after that important stage in rebuilding the State, the country was taking firm steps on the road of democracy and development and that it had a bigger need to open the doors of investment in Iraq. Turning to the state of the country’s security forces, he told the Assembly that, at the end of this year, the United States forces would withdraw according to the agreement signed between the two nations in 2008. During the course of this year, Iraqi security forces demonstrated their great ability to combat terrorism and that they would be able to fill the vacuum that the withdrawal of United States Forces would create. At the same time, Iraq would need to keep numbers of American experts and others in the fields of training and capacity-building.

Turning to Iraq’s international and regional relations, he noted that the country’s constitution and the national programme for the current Government determined the general basis for its foreign policy. It provided that Iraq was a founding and effective member of the League of Arab States. In addition, Iraq was part of the Islamic world and respected the principles of good neighbourliness and non-interference. He urges his neighbours — Turkey and Iran — to use diplomacy and dialogue and stop the bombing of Iraqi territories in the Kurdistan region. He also expressed Iraq’s concern about the “tragic situation” of the Palestinian people, which he said was the result of Israeli practices that were incompatible with international laws and customs, as well as international humanitarian law. Iraq, therefore, endorsed and supported the Palestinian Authority’s “direction” to go to the United Nations to achieve full international recognition as a Palestinian State during the current session of the General Assembly and called on the international community to stand by the Palestinian people in their legitimate struggle.

On international cooperation, he pledged that his country would work to develop its cooperation will all countries that stood with it and supported it in the stability of the ongoing political process and the strengthening it and its reconstruction. “We refer here to the United States of America and the European Union, when we mention these two parties, we mention them not because they are the only ones that stood with Iraq, but because we are linked by mechanisms of actions that should be implemented,” he said. With regard to its relations with the United Nations, he declared that his country would continue in the approach of constructive cooperation with the world body and would keep the commitments it made. He welcomed the United Nations Assistance Mission for Iraq (UNAMI), and pledged Iraq’s full commitment to supporting the Mission and the protection of its staff and premises.