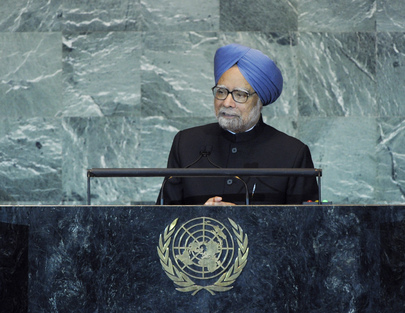 MANMOHAN SINGH, Prime Minister of India, said it was a time of “great uncertainty and profound change”, pointing to the global economic slowdown and unprecedented social and political upheaval in West Asia, the Gulf and North Africa. The unresolved Palestinian question was also a source of great instability and violence. India supported Palestine’s request for full United Nations membership. He pointed to growing terrorism and new threats to international security, such as piracy. “We have no choice but to meet those challenges. We will succeed if we adopt a cooperative rather than a confrontationist approach,” he said. Success would also come from efforts grounded in multilateralism, legitimacy and the rule of law. Societies could not be reordered from the outside through military force. People everywhere had the right to choose their own destiny and decide their own future. The international community had a role in transition and institution-building, but prescriptions must not be imposed from the outside.

It was necessary to address the deficit in global governance, he said. A stronger, more effective United Nations was needed; that required early and urgent reform of the Assembly and the Security Council. He called for effective ways and means to better coordinate the macroeconomic policies of major economies, and for reforming global financial institutions speedily and efficiently. The development agenda must once again be the United Nations main priority. He called for a more determined effort to ensure balanced, inclusive and sustainable development.

In the last few decades, India had lifted tens of millions of its own people out of abject poverty, he said. It was in a position to better feed its people, better educate them and widen their economic choices. But there was still a long way to go. He called on the international community to work in partnership with India to quicken India’s transformation, a move which would expand the global economy. Developing countries needed investment, technology and market access for their products, as well as aid in education, health, women’s empowerment and agriculture. During the recent Least Developed Countries Conference, India had strengthened its partnership with those nations by significantly enhancing lines of credit to them for capacity-building.

He called for particular focus on Africa and for empowering its greatest resources — its people — with technology, education and skills development. At the second India-Africa Forum Summit held in Addis Ababa earlier this year, India offered $5 billion in lines of credit and $700 million in grants for human resource development, technology transfer and institution-building. The United Nations should lead food security efforts. He called for more cooperation in agricultural technologies, water conservation, land usage and productivity, and commodity price stability.

Developing countries needed a peaceful external environment to grow, he said. The fight against terrorism must be unrelenting, fought on all fronts and be non-selective. India and Bangladesh were cooperating in security, an encouraging sign. Pointing to the recent assassination of Burhanuddin Rabbani in Kabul, he said Afghanistan’s nation-building and reconciliation process must succeed and India was helping Afghanistan towards that end. He desired creation of an open, transparent and inclusive architecture for regional cooperation and the peaceful settlement of disputes in Asia and the Pacific. He called on the United Nations to comprehensively resolve piracy in the Red Sea and off the coast of Somalia and said India was ready to work with nations towards that end. Further, the action plan put forward by India’s Prime Minister Rajiv Ghandi for a nuclear-free and non-violent world provided a concrete road map for achieving nuclear disarmament in a time-bound, universal, non-discriminatory and verifiable way. On a related issue, he said his country had undertaken a thorough review of the safety of its nuclear plants.