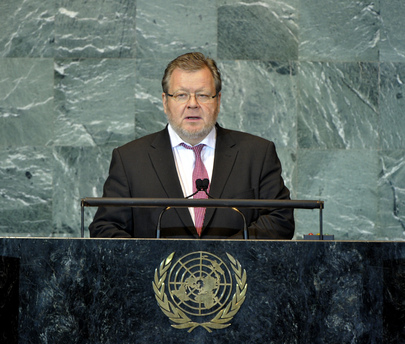 ÖSSUR SKARPHÉǑINSSON, Minister for Foreign Affairs and External Trade of Iceland, said that as the world had witnessed the worst hunger crisis of the century in the Horn of Africa, it was the collective duty and responsibility of those from wealthier nations to do better to provide relief with more speed and generosity to those deprived of the basic necessities of life – food and water. Iceland’s Parliament had unanimously agreed to substantially increase contributions to developing nations in the coming year, and had accepted a time-bound plan to raise aid targets to 0.7 per cent of the gross national product (GNP).

That fight, he said, was the same as the fight to protect the planet, especially in light of next year’s twentieth anniversary of the Earth Summit in Rio. However, the sobering truth was that the ambitions of Rio were still a far cry from being realized. The key theme of Rio next year would be the green economy, to which Iceland had added its efforts, including renewable energy, marine health, sustainable land use and gender equality. A true revolution was needed, creating a seismic shift from fossil fuels to renewable energy. Iceland had cutting-edge geothermal technology, which it wanted to share with other areas brimming with potential. Those areas in Central and South America, East Africa and Southeast Asia could become self-sufficient in terms of green energy.

Turning to the health of the oceans, climate change threatened to put fisheries under a new strain, he said. “As a marine biologist, I fear that sooner than later, this may affect the world’s fishing stocks, a vital source of protein for more than 1 billion people.” That was another reason to urgently conclude a post-Kyoto agreement on greenhouse gas reduction. “Every day the Arctic is a silent witness to climate change. The snow I experienced as a kid is today fast becoming a rare event for my two teenage daughters. The sad truth is that the Arctic glaciers and sea ice are melting much faster than anyone ever anticipated.” That melting would open new areas for oil and gas exploitation, but it would come at a price, melting the surrounding tundra, a carbon buffer to the climatic systems. That, in turn, would only accelerate global warming. Exploitation of the Arctic should not be allowed without strict rules, he said.

On the same principle that had led Iceland to recognize the Baltic States in 1991, his country today also supported the Palestinian struggle for statehood. Iceland would welcome Palestine as a new United Nations Member State, based on pre-1967 borders, exactly the same criteria laid down by the European Union, the Quartet and, lately, by United States President Barack Obama in a speech in May. “I have been to Gaza,” he said. “I have talked to the people, the fishermen that no longer can ply their trade, the young people that have no employment, the families that need a roof over their heads. I have also been to the West Bank. I have seen with my own eyes how the land of the Palestinians is literally cut to pieces by horrible walls of separation. This is wrong. This is unjust. This is against every moral code that Iceland has ever stood for as a guardian of human rights.”

Palestine was doing the same as Israel did in 1947 — and Iceland had supported it, he said. Israel had taken its case to the United Nations and emerged with statehood. Palestine deserved the same. “It is hypocrisy to suggest otherwise,” he asserted, adding, “it would be foolish to deny Palestine her right to statehood”. Iceland, therefore, would vote “yes” when a resolution on the Palestinian statehood came to a vote in the General Assembly. The Icelandic Government was determined to fully recognize Palestine and would put to the Parliament of Iceland next week a resolution on the recognition of Palestine as a sovereign and independent State.